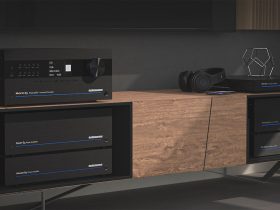 Corie Barry was less than a year into her position as CEO of Best Buy Co. Inc. when COVID-19 hit. Her leadership skills would be put to the ultimate test.

Over the past almost year, customers have visited stores, placed orders online, and arranged curbside pick-up. This is the reality for most retailers nowadays, big and small. And that includes big box retailer Best Buy. Since March, Best Buy adopted the curbside pick-up option where necessary, both in the U.S. as well as across Canada.

Best Buy might not be considered an “essential” retailer in that it doesn’t sell food or toiletries. But people were scrambling to set up home offices and get the necessary gear for their kids to attend virtual school. This means plenty of products the retailer sells were not only in high demand but essential for allowing people to work as efficiently from home as they did in the office, and for students of all ages to be able to seamlessly continue their education from home. In the tech world, the demand for webcams might very well have rivalled that of toilet paper and hand sanitizer.

In her talk with Alan Murray, CEO of Fortune Media (USA) Corporation at virtual CES 2021, Barry recalled the landscape at the onset of the pandemic. Things happened overnight, it seems, and Barry particularly observed three dominant changes. First, Best Buy’s mantra of enriching lives through technology became a requirement, not an option. Moms and dads were no longer mulling over whether or not to get their child a laptop – it was a necessity. Now. A home printer, headset, and large monitor were also crucial to replicate your office at home. That old wireless router you promised to upgrade next year? There’s no more putting it off now that everyone is at home and taxing the system with high-bandwidth tasks like streaming video. Customers were realizing that they now needed a new selection of tech products, some of which might never have been on their radar.

Second, Best Buy had to re-think how it provided products to customers, gravitating more focus to e-commerce and adopting an entirely new method: curbside pick-ups. This was not only to adhere to local restrictions but also to serve customers in a way they felt most comfortable, even if stores were allowed to re-open with limited capacities. And third, employees had to learn how to work in a completely different way, becoming more flexible and doing things like walking boxes outside and loading up cars instead of manning the home AV or gaming areas.

Barry recognizes that many of these trends will continue for some time to come and probably persist long after COVID-19 is a distant memory. This is largely because the older generation, now having gotten familiar and comfortable with online ordering for essentials like groceries, are more receptive to it. They will likely continue to seek out similar e-commerce experiences in other areas now that they appreciate how easy and convenient the process is.

Because of this predicted shift, Barry believes Best Buy’s physical bricks-and-mortar stores will take on a different, but broader, role. They will remain important for the experiential aspect, as the place where customers can touch and feel the latest smartphones or test out the hot new video game (once it is safe to do so again, of course). They will also be the place for providing support and help, whether it’s what memory card to get for a DSLR, the best phone case for the new iPhone, or Geek Squad IT support for a laptop. But a new role will be that of fulfillment.

Online sales rose 175% at Best Buy during the height of the pandemic, but Barry says 40% of customers still opted to pick up their purchases either in store or curbside. Sometimes, people just don’t want to wait. They want it the next day, or even in an hour. And they’re willing to drive to a shop just to pick it up if it means they don’t even have to get out of the car. If this is what it takes to gain some dollars back from e-tailers like Amazon that can ship to you within a few hours, in some locations, so be it.

This, of course, hinges largely on how well the curbside pick-up process works. Some customers have reported terrible experiences with various retailers, including waiting for a long time for the items to be brought outside only to have half of them be wrong or missing. But others have had wonderfully seamless experiences, especially when it’s picking up one item, like a portable Bluetooth speaker or pair of headphones, not an entire week’s worth of groceries.

“We have to agnostically meet customers wherever they are,” said Barry, “and that will be the future of retail: the couch, counter, curbside.” We like to call these the three Cs.

The three Cs can, and arguably will have to be, applied to most retail stores going forward. Without an investment in digital, it will be difficult to keep up. But even a minor social media presence or website that directs to e-mails or instant messaging to arrange pick-up or delivery, could make a world of difference.

For Barry, the magic has been in watching the unification of the Best Buy team’s efforts as they respond to changing customer needs and requirements. “[They have had to] change based on how customers want to interact with them.”

With non-essential stores remaining closed in many areas across Canada, now is the perfect time re-think how to augment the traditional retail experience with an effective approach inspired by these three Cs.