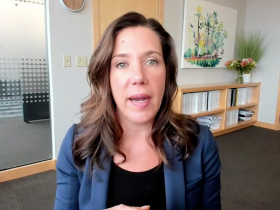 We have all heard of the acronym FOMO or fear of missing out.  Lately, I’ve been thinking of starting a new acronym along the lines of FOFO, or what I call the fear of falling out.  The fastest growing headphone category is what the industry calls true wireless, meaning in-ear headphones with Bluetooth connectivity in each bud that are not tethered to each other with a cable. You stick each bud in your ear and away you go. In Q3 2019, 43 million true wireless earphones shipped globally representing a 183% increase YOY.

The problem or joy, depending on your perspective, is that true wireless in-ear headphones must each have their own battery, not to mention Bluetooth circuitry for connecting to your mobile phone or other source device.  If you are trying to get at least four hours of respectable battery life out of a true wireless in-ear, it means the battery has to be relatively large, making the in-ears somewhat heavy.  Add to that, the battery acts almost like a counterweight to the silicon tip that is in your ear and this my friends, is the cause of my FOFO – most of the weight of a true wireless in-ear is on the outside away from your ear canal, like a glass of water that’s hanging over the edge of a table, that’s bound to fall.  I spend more time worrying about losing an in-ear true wireless bud than I do enjoying the music!

So deep is my FOFO that I start fiddling with the earphone, pushing it deeper into my ear which in itself causes all sorts of other problems, for more often than not, that fiddling sets off a control sensor.  I’m shoving the in-ear into my skull at the same time, I’m pausing a song or skipping to the next track! Obviously, if you happen to be sitting on a chair enjoying music or a podcast, the chances of an in-ear falling out are pretty slim and the need to check your FOFO and fiddle, is almost non-existent.  But what if you want to go for a run, or hit the gym or perhaps even go for a swim?  How long before that right in-ear falls out and your fitness routine is either interrupted while you start your search party or worse, the true wireless bud has rolled over the cliff and is gone forever?

According to CBS Markets, Apple sold between $10 and $12 billion AirPods in 2019. Apple will make a further $700 million selling replacement AirPod parts like the one that you inevitably lose.  The New York Transit Authority retrieved 1,200 earbuds from subway tracks in Q4 2019 alone.  Losing true wireless earphones is so prevalent that headphone manufacturer Skullcandy teamed up with smart location company Tile to include tracking technology built-in to the cases of the latest Skullcandy in-ears.  Not a bad idea, but it does nothing to solve my fear of an in-ear falling out. I’m not going to lose the case, it’s the bud that’s the problem. For this very reason my go-to true wireless earphones are usually from brands like Shure or B&O that remain wireless between the earphones and your listening device but still host a wire between the left and right buds.  If one falls out, it has a good chance of dangling while being anchored to the one that’s still intact.  I can also use the wire as a necklace and drape the in-ears when not in use.  Purists will say that these are not true wireless and the ungainly transmitter and battery that bulges from the shared wire, looking like a python that’s just eaten a cow creates its own problems.

The engineers at JBL are apparently not in cahoots with the JBL sales team for they have launched the JBL Endurance Peak II true wireless that is designed in a way that makes it virtually impossible to fall out.  So much for JBL selling single units like Apple!  The Endurance Peak II incorporate a silicon hook that goes around your ear anchoring the in-ear to your head.  JBL calls this a “powerhook” that in addition to creating a firm fit, it also allows the battery to be housed on the base of the powerhook which completely changes the cantilevered centre of gravity that pulls the in-ear away from your head with most other true wireless buds. And because of the hooks, the battery can actually be larger offering over six hours of playback compared to a more common four hour battery life, for the category. I wear eye glasses and the arms of my glasses did not compete with the powerhook and both in-ears and glasses stayed on my head during fitness.

The Endurance Peak II are also rated IPX7 meaning they are fully waterproof.  I still think you’d be a moron to go surfing wearing these but if you get caught in a heavy rain while on a run, your tunes will continue.  IPX7 also means that rinsing the in-ears after a workout is also perfectly acceptable.  Mind you, while the in-ears are waterproof, the USB-C-to-USB-A charging case is not, so don’t put damp buds back in the case.

The soundstage of the Endurance Peak II are perfectly acceptable utilizing 10mm dynamic drivers.  Somewhat bass heavy for my taste and there is no app functionality to equalize the soundstage to your preference.  Then again, other true wireless in-ears that I own that perhaps sound better at twice the price, keep falling out when I exercise so they rarely get used.  The Endurance Peak II are snug, easy to use and synch effortlessly with an iPhone via AAC Bluetooth and most importantly they don’t fall out.  Built-in microphones means that you can take a call with either left or right in-ear. They also cost just over $100 CDN making them one of the least expensive true wireless options from a reputable name brand.  If your goal is to enjoy music while exercising, you’d be hard pressed to find a better option, especially at this price. JBL is distributed in Canada by Erikson Consumer