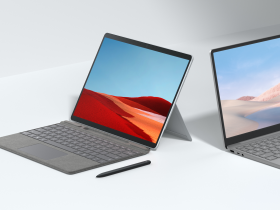 Apple has released the second-generation version of the iPhone SE, which features a 4.7″ Retina HD display, Touch ID, A13 Bionic chip, and more, and will sell in Canada for $599.

The smartphone, which will come in black, white, and PRODUCT(RED), is a compact device that marks the most affordable iPhone to date. In addition to the A13 Bionic chip, which enables improved battery life, it has the best single-camera system ever in an iPhone that included Portrait mode. The phone itself is also dust and water-resistant with an IP67 rating that allows it to be submerged in up to one metre of water for up to 30 minutes.

iPhone SE also features the familiar Home button designed with sapphire crystal to be durable and to protect the sensor, and a steel ring to detect a user’s fingerprint for Touch ID. Fill in passwords using iCloud Keychain, log in to apps, authorize App Store purchases, and make Apple Pay transactions.

iPhone SE is wireless-charging capable with Qi-certified chargers and also supports fast-charging, providing up to 50% charge in just 30 minutes. Lightning-fast download speeds are available with Wi-Fi 6 and Gigabit-class LTE. Dual SIM with eSIM allows for having two separate phone numbers on a single device while traveling abroad or for use as a business line.

A portion of proceeds for iPhone SE (PRODUCT)RED purchases will go directly to Global Fund’s newly established COVID-19 Response, which provides funding to countries in need of PPE, diagnostics treatment, lab equipment, public safety communications, supply chain support, and more, as well as HIV/AIDS grants that provide testing, counselling, treatment and prevention programs with a specific focus on eliminating transmission of the virus from mothers to their babies.