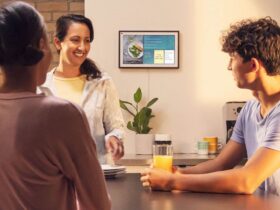 Amazon Echo Show 15 Can Be Mounted on a Wall

Let me start by saying as a THX Certified Professional, I am confident in buying anything that carries the THX logo imprint. I’m not saying that it means the product will be the best-of-the-best, but almost anything bearing the THX logo means that it will reach or surpass my minimum, yet relatively high threshold of audio acceptability. However, this doesn’t mean that I end up loving every THX Certified product that I buy. For example, when THX Certified DVDs with bad transfers were released, or worse, THX Certified VHS tapes came to market, I was sorely disappointed, and was very vocal about the poor sound quality on various online forums.

A product that rarely disappoints is one that uses the THX Achromatic Audio Amplifier or AAA for short, that THX calls the world’s most linear amplifier technology used for home, in-car speaker systems and standalone headphone amplification. THX AAA ensures the ultimate no-compromise headphone audio experience by delivering the world’s highest fidelity, with infinitesimally low levels of noise, distortion and power consumption.

I have tried both THX AAA plug-in and in-line applications and I like each system. However, the home power amplifier is too rich for my blood (either that or too big in physical size) and I seldom use headphones at home, so there is no use for me to buy a standalone headphone amp. It would make more sense to find an in-line headphone amp. And thanks to Helm Audio, my prayer was answered.

Helm Audio recently released the DB12 in-line headphone amp using THX AAA technology. The in-line amp is the size of my thumb and battery powered via USB for up to eight hours of playback time. It plugs directly into the sound source so you can not only use your phone, but almost any digital playback source. In my case, my disc players.

For my review, I used my newly purchased (yet vintage) new-old-stock Sony Discman and Sony Minidisc player, connected to the Helm Audio amp along with my new Razer Opus THX Certified ANC headphones that I reviewed here. THX is actually now owned by Razer so you should expect most Razer products to be THX Certified moving forward. Suffice to say, the (up to) 12dB boost of the in-line amp created a much better punch, transients, and imaging compared to the headphones connected directly to either the Discman or Minidisc player. Unlike MegaBass circuitry to boost the bass for a more exciting sound found in Sony products, the Helm Audio DB12 has +6dB Bass Boost which I prefer over Sony’s MegaBass circuitry. It’s cleaner and has a faster transient. The sense of imaging also improved very dramatically when I turned the switch off and on. Instruments placements in the Telarc’s Erich Kunzel orchestral recordings became more apparent, clear cut, and enveloping at the same time.  The Helm Audio DB12 only has an analog jack and no Lightening or USB-C connector to power the device.  That means the Helm Audio DB12 houses a built-in battery that is rated for eight hours of playback. Not exactly Toronto to Hong Kong, but for most of my travel will do the job.

This headphone amplifier not only worked with my personal set of headphones but also with WestJet’s $12.00 disposable “hifi earphones” that I keep around as a lowest of the low audio sample. The DB12 made the god-awful sound that you would expect from an airline’s offering into something that is listenable and not stress-inducing. Of course, I didn’t expect miracles. after all, Westjet’s $12.00 “hifi earphones” are just $4.00 Dollarama earbuds with an airline markup, but the DB12 managed to turn something unlistenable into an acceptable source but I would still recommend to travel with your real headphones in the first place!

Whether I’m listening to Renee Oldstead, George Michael, David Sanborn, or Judas Priest, the DB12 outperformed any sub US$500 in-line headphones amplifiers I’ve tried thus far. And it only costs US$200. That I am getting such performance out of a product costing half of the competitor’s offering doesn’t make sense, but it works, and it works very well.

For what it is; an affordable, lightweight and compact in-line amp, I totally recommended it. The DB12 will definitely be used often alongside my Minidisc player and Razer Opus headphones as I travel locally and abroad. I’d even willing to go as far as giving this device as “David’s Take Top 5 Product of the Year.”