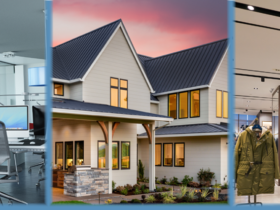 Formaldehyde is a colourless gas pollutant that can enter indoor air though off-gassing or combustion. The Canadian government notes that potential sources of formaldehyde from off-gassing can include particleboard, fibreboard, hardwood plywood paneling, wallpaper, carboard, paper products, permanent press fabrics like drapery, glues, paints, varnishes and floor finishes. Off-gassing, the process by which products release formaldehyde, can take weeks – potentially even months or years – to disappear completely. Burning materials such as tobacco smoke, improperly vented gas, or oil burning appliances and smoke from fireplaces or wood-burning stoves can also be a source of formaldehyde.

Since formaldehyde is 500 times smaller than particles the size of 0.1 microns, says Dyson, it is particularly difficult to capture. Health effects can vary from high exposures resulting in burning sensations in the eyes, nose and throat, to long-term, moderate exposure having the potential to worsen asthma symptoms, according to the Canadian Government. The International Agency for Research on Cancer (IARC) also classifies formaldehyde as “carcinogenic to humans.”

“The off-gassing tendency of formaldehyde means that it can go undetected in a home for years,” says Alex Knox, Vice President of Environmental Care at Dyson. “Dyson has engineered a machine that provides accurate and successful sensing, capture and destruction of the pollutant. Our solid-state sensor doesn’t dry out overtime, lasting the lifetime of the machine.”

In addition to the existing particle, NO2, volatile organic compounds (VOCs), temperature and humidity sensors, the new air purifier features the intelligent formaldehyde sensor that ensures precise sensing of the pollutant for the lifetime of the machine.

Featured in the filter system in the Dyson Purifier Hot+Cool Formaldehyde is a new Selective Catalytic Oxidization (SCO) filter. While the HEPA and activated carbon filters in the machine are designed to capture and trap air pollution, this filter is designed specifically to not just capture, but destroy formaldehyde at a molecular level. The catalytic filter has a unique coating, with the same structure as the Cryptomelane mineral that was determined by Dyson chemists as the ideal catalyst. Its billions of atom-sized tunnels are the optimal size and shape to trap and destroy formaldehyde. The machine does this through a process of oxidation. An oxygen rich surface removes electrons during the chemical reaction causing the formaldehyde to break down into tiny amounts of water and CO2. It then regenerates from oxygen in the air to keep destroying it continuously. This means that this filter never needs to be replaced.

In Dyson’s new purifiers, which meet the HEPA H13 standard, the filter system captures 99.97% of particles as small as 0.3 microns, including allergens, pollutants, bacteria, pollen, mould spores, and gases.

They use Dyson Air Multiplier technology to project purified air to every corner of the room. Auto mode enables the machine to maintain a preferred room temperature and air quality level. Control and monitor air quality from anywhere using the Dyson Link app. Control it hands-free in with Google Home (English only), Alexa and Siri.