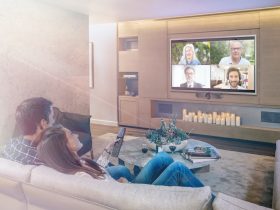 Exertis | JAM, which began operating in the ’70s in Montreal under the trade name Erikson Music as an importer/distributor of musical instruments and accessories, is celebrating its 50th anniversary this year. To mark the historic milestone, the company is planning a variety of events to highlight its journey from 1972 through to today.

“Five decades of strong relationships and partnerships is something we’re proud to be celebrating,” says Stuart Frenkel, President and CEO of Exertis | JAM. “We’ve grown our distribution business and capabilities significantly since our inception, from musical instruments to pro audio and lighting to consumer electronics. We see a bright future ahead, one that will allow us to continue fostering healthy bonds with our partners and providing the excellent customer service we’re known for, all the while promoting our core values and encouraging the growth and development of our people.”

Exertis | JAM first launched in the 1970s during what was known as the golden age of rock and the early years of disco, which sparked inspiration in its founder Marty Golden. Having worked in music retail, his vision was to start a down-to-earth distribution service for musical equipment, run by real music fans who “dug” the “various logistical issues that plagued the entertainment business and had the knowledge to overcome them.”

A few years later, Golden was joined by partner Eddy Shenker: Golden possessed the music acumen while Shenker the financial know-how. Together, they embarked on a journey to build up the distribution company. They began with an old Volkswagen bus full of gear and set out traveling across Canada in search of customers. It was from this venture that Erikson Music, the company’s first division, was born. The company had fewer than 10 employees and sales of under US$1 million.

Through the ’70s, JAM continued to grow, working to bridge the gap between manufacturer and retailer while helping music aficionados and musicians gain access to quality instruments. In 1980, JAM acquired its first company, and a little over a decade later, they were joined by another Marty, Marty Szpiro, to create a dynamic trio in pro audio and expanding into consumer electronics.

By the turn of the millennium, JAM had grown substantially, acquiring new entities, developing its own brands, and entering the U.S. market. “Even with this tremendous progress,” says the company, “JAM never lost sight of its values: putting the customer first, whether they be internal, external, or potential, and ensuring the promotion of diversity, inclusion, and equality within its JAMily.”

Today, Exertis | JAM has more than 650 employees worldwide and sales exceeding US$500 million. The company continues to develop new solutions to meet the changing needs of its partners and customers. This includes, most recently, the digitization of its business model and optimizing the supply chain. The company has a distribution network made up of 18 divisions that serve markets ranging from professional audio and lighting to consumer electronics, and musical instruments.

“The future is shining bright,” enthuses the company, “and the JAMily will head towards it with the same determination and perseverance its founders had when they were but starry-eyed youngsters with a van and a dream.”

To recognize the hard work and invaluable contributions JAMily members have made towards helping Exertis | JAM flourish for a half-century, a series of Golden Anniversary parties are scheduled to take place at the Connecticut and Mississippi distribution centres, as well as the home office in Montreal. Additional events and activities will take place throughout this golden year, to be announced at a future time.

“Just as incredible as a half century of existence are the achievements we’ve accomplished during that time,” adds Frenkel. “We’ve played an important role in helping our partners achieve tremendous growth throughout North America, and we look forward to a further five decades of innovation, expansion, and prosperity for them and everyone in our organization.”