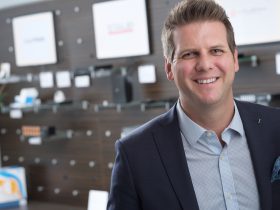 Twenty-two years ago, in July 2000, Apple Chief Steve Jobs, Apple Design Lead Jony Ive, and audio manufacturer Harman Kardon collaborated on a product called the SoundSticks.  Jony Ive was the Chief Design Officer of Apple from 1997 until 2019. The SoundSticks were an extension of what was originally called the iSub, a Harman-made subwoofer that Ive’s designed in 1999 as a companion to the Mac G3 that is now housed in the permanent collection in New York’s Museum of Modern Art.  A year later, the sub was released as a 2.1 system called the SoundSticks (really an upgrade to the Harman manufactured, but Apple branded ProSticks) containing two clear acrylic satellite speakers along with the sub.

The SoundSticks have been in continuous production since 2000 with subtle updated versions released in 2004, 2009, 2012 and 2020. When we look back at the most influencial and timelessly designed computer audio products from the 21st Century, I bet the Harman Kardon SoundSticks 4 will rank near, if not at the top of the list.  They reach that accolade for being ageless and as current today as they were when released two decades ago. The SoundSticks became a product that followed Apple’s lead where a product should be as interesting to look at as it is functional.

What makes a product timeless?  When I am asked why I admire an Eames Lounge chair for example, I will usually start my response by saying the iconic chair first released by Ray and Charles Eames in 1956, could just have easily been released today in 2022.  When a product doesn’t date or start looking like a reflection of its generation, it has succeeded in being timeless.

When the dinner table debate asks me to weigh in on “who’s the greatest band of all time?” I have no hesitation in giving that honour to the Beatles for the very same reason why Eames created the greatest chair; their music is timeless.  Songs like “Here Comes the Sun”, “Yesterday” and “Let it Be” just don’t age, they sound as relevant today as they did fifty years ago.  Again, the design is timeless.

While names like Eames, Hans Wegner, Mies van der Rohe, and Gio Ponti are the ambassadors of Mid-Century modern design and the creators of some of the most sought-after furniture even to this day, consumer electronics has also been blessed with product releases from sought after designers.  Dieter Rams for example, who designed for the Braun Company has been well-documented as having a tremendous design influence on Apple founder Steve Jobs’ minimal esthetic and in the 1920s, Danish engineers Peter Bang and Svend Olufsen pioneered hi-fi components to be objects of art as much as for sound.

According to Dieter Rams, good design (or timeless design) should meet the following ten principles, a list Rams created in 1970 that has become iconic and timeless in itself:

Make a product that is useful

It should be unobtrusive

Be thorough down to the last detail

Be environmentally friendly (Rams made this list 60 years ago!)

Should involve as little design as possible

If you succeed in all ten Rams’ observations chances are good your design will be as well-regarded today as in one hundred years from now. I am waging the Harman Kardon SoundSticks 4 meets those requirements.

The 20th Anniversary SoundSticks 4 are a 4th-generation 2.1 Bluetooth computer audio system.  While one may argue that a product really can’t be timeless if different versions are released over the years, I would push back that anything to do with electronics needs some flexibility to accommodate advances in connectivity.  The main point is that the rounded, transparent design has remained intact. The 20W satellite speakers with four 1.4-inch full-range drivers are tall and slim and housed in a subtle prismatic glass with ripples along the back panel that are visible from the front. They sit on pedestal white stands slightly angled up toward the listener. The lower-case harman / kardon font logo is in a light grey colour on the lower part of the acrylic housing.  The 100 watt down-facing 10.9 X 9.1 X 9.1 inch sub is a clear acrylic dome with internal components in hues of white and light grey that correspond to the colour palate of the 10.6 X 3.3 X 3.3-inch (HWD) satellites. The system combines for 140W rms total and a frequency range of 40Hz to 20kHz

In 2020, Harman Kardon released SoundSticks 4 the latest version and the one that I think Harman no longer needs to change, marks the product’s first major external redesign with the satellite speakers moving to white translucent plastic drivers and a smaller redesigned stands. The subwoofer remains domed but has a thinner profile and a rippled surface and no longer looks like a wine decanter stuck inside a plastic dome.  The soft-white LED light remains on but moves to a light blue hue only when pairing.

The Soundsticks 4 are a plug and play product.  Both right and left satellite speakers connect by a white wire to the sub which houses the power supply and all the control buttons – on and off and Bluetooth pairing at the rear of the sub and volume control at the front. Music is played either wirelessly via aptx 4.2 Bluetooth or wired via 3.5mm to 3.5mm.

Pairing, as with most modern-day electronics is a breeze.  Long gone are the days of a twirling wheel looking for Bluetooth and the SoundsSticks LED moving to a soft white tells you that pairing has been successful.

Like all products, there is always something to find that could be a refined improvement and if SoundSticks 4 had an EQ control the product would be perfect.  Oh and perhaps a small white well-designed remote.  Alas, if every product was perfect we would never have new releases!  But from a design perspective the Harman Kardon SoundSticks are already a classic.  I’m inclined to buy two, one to enjoy on my office desk as much to look at as to listen, and one to keep in the box and save for 50 years when they will be worth a fortune being a product both tied to Jony Ive and for well, that timeless design.

When a product remains virtually unchanged for twenty years – remember we throw away our phones after two years and our TVs after five.  That the SoundSticks are still looking and sounding great 22 years on, places them in icon territory.  A object to desire that is indeed truly timeless.

Harman Kardon is exclusively distributed in Canada by Erikson Multimedia. The SoundStick 4 are widely available HKSOUNDSTICK4WHTAM $419.99