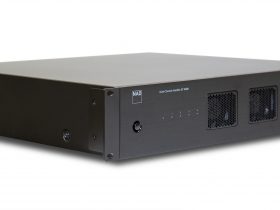 The new 27-inch iMac offers the latest 6- and 8-core 10th-generation Intel processors, the 10th-gen core with Turbo Boost speeds reaching 5GHz for up to 65% faster CPU performance. When working with memory-intensive applications, iMac features double the memory capacity for up to 128GB.

When compared to the previous-generation 8-core 27-inch iMac, the new iMac delivers up to 65% more plug-ins in Logic Pro X; up to 40% faster 8K ProRes transcode in Final Cut Pro X; up to 35% faster rendering with Arnold in Autodesk Maya; and up to 25% faster build time in Xcode.

When compared to the previous-generation 27-inch iMac with Radeon Pro Vega 48 graphics, the new iMac delivers up to 55% faster rendering in Maxon Cinema 4D ProRender; up to 50% faster demo fly-through in Unity Editor; up to 45% faster performance in “Total War: Three Kingdoms; and up to 30% faster timeline rendering in Final Cut Pro X.

The 27-inch iMac now comes standard with SSDs across the line, delivering fast performance up to 3.4GB/s for launching applications and opening large files. For users who need massive amounts of storage, iMac also features an 8TB SSD option for the first time, four times the SSD capacity of the previous-generation 27-inch iMac.

iMac also includes the Apple T2 Security Chip, Apple’s custom-designed, second-generation silicon. The storage controller in the T2 Security Chip provides on-the-fly data encryption for everything stored on the SSD, so files and data are safe and secure. And the T2 chip also checks that software loaded during the boot process has not been tampered with, giving the 27-inch iMac, and any Mac with the T2 chip, the most secure storage and boot process of any computer.

With 14.7 million pixels, one-billion colours, 500 nits of brightness, and support for P3 wide colour, the Retina display on iMac delivers an immersive front-of-screen viewing experience. All those pixels result in text that looks like a printed page, says Apple, along with sharper photos with more detail, and the ability to edit 4K video at full resolution. The Retina 5K display on the features True Tone technology, which automatically adjusts the colour temperature of the display to match a user’s ambient lighting.

The new iMac offers a nano-texture glass option, first introduced on Pro Display XDR, for better viewing under various lighting conditions, such as a bright room or indirect sunlight. Unlike typical matte finishes that have a coating added to the surface to scatter light, this option is produced through a process that etches the glass itself at the nanometre level. The result is extremely low reflectivity and less glare while maintaining stellar image quality and contrast, Apple declares.

Apple also announced that its 21.5-inch iMac will come standard with SSDs across the line for the first time. Customers can also choose to configure their 21.5-inch iMac with a Fusion Drive.

This fall, iMac can be updated at no cost with macOS Big Sur, the latest version of the desktop operating system that introduces a redesign along with enhancements to key apps. Safari is includes new features, including a customizable start page, more powerful tabs, built-in translation, and a new Privacy Report. The updated Messages app lets users send more personal and expressive messages, and easily keep track of and interact within group messages. Maps also offers an all-new experience with immersive features for exploring and navigating the world.