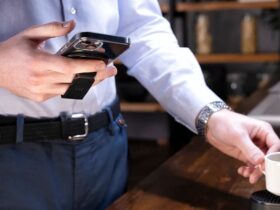 Apple has introduced its next-gen Apple TV 4K, which it says is more powerful, offers cinematic quality, and is more affordable, as well.

Driven by the A15 Bionic chip for faster performance and more fluid game play, the new Apple TV 4K offers HDR10+ support in addition to Dolby Vision. With Dolby Atmos, Dolby Digital 7.1, or Dolby Digital 5.1 surround sound as well, you can get an immersive audio when used with compatible equipment. Running tvOS, it comes with the Siri Remote that features a touch-enabled clickpad and seamlessly integrates with other Apple devices and services to function as a smart home hub.

Access movies and TV shows for rent or purchase, stream from Apple TV+, and stream music as well from Apple Music, both with the appropriate subscription. You can also access Apple Arcade for playing games through Apple TV 4K, along with Apple Fitness+.

This fall, new features are coming to the Apple TV experience with tvOS 16, including updates to Siri that will make it easier for you to use your voice to control Apple TV and interact with the results. Siri on Apple TV features a complete redesign, and will be able to recognize each user’s voice, so every family member can easily access their own selection of movies, shows, music, games, and apps, and pick up where they left off. By using the Siri Remote and asking “What should I watch?” you can get tailored recommendations.

When wearing AirPods, say “Hey Siri” to search and enjoy a hands-free way to control Apple TV. Siri support on Apple TV has expanded to Chile, Finland, and South Africa, and will launch in Denmark, Luxembourg, and Singapore later this year, bringing Siri on Apple TV to 30 countries and regions.

With iCloud Shared Photo Library on Apple TV, everyone in the family can enjoy everyone’s photos together on the big screen. Cross-device connectivity on Apple TV 4K will enable developers to integrate personalized experiences between their iPhone and Apple Watch apps with Apple TV.

Also enjoy SharePlay by starting a FaceTime session on iPhone or iPad and watching a TV show or movie on Apple TV to stay in sync. With shared playback controls, including using the Siri Remote, anyone in the SharePlay session can play, pause, or jump ahead.

As a home hub, Apple TV 4K securely connects to compatible smart home accessories, including HomeKit cameras, lights, shades, and more. You can set scenes and control the smart home while away, and accessories can run automatically. Apple TV 4K is also an essential building block for Matter, the new smart home connectivity standard that enables a wide variety of accessories to work together seamlessly across platforms.

The new Apple TV 4K uses 30% less power than the previous generation while achieving more powerful performance. The efficiency gains of A15 Bionic eliminate the need for an internal fan, resulting in a more compact design and contributing to a 25% reduction in carbon footprint over the previous generation, says Apple.

You can pre-order the new Apple TV 4K with Siri Remote in Canada today at a new starting price of $179, with availability beginning Friday, November 4. The Siri Remote, which now uses USB-C for charging and is compatible with all generation of Apple TV 4K, comes included or can be purchased separately for $79.

For a limited time, eligible customers who purchase a new iPhone, iPad, Apple TV, or Mac can enjoy three months of Apple TV+ and Apple Arcade for free.