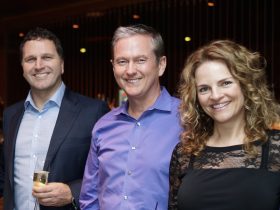 I’ve been running a smart home for at least the past decade. It started with a handful of internet enabled light switches from Wemo that’s now grown to a whole-home controlled by Wemo, Wiz, and Philips Hue. Of course, all the internet enabled systems in the world won’t do much good if I still have to pull out my phone to turn things on or off. Thus, I added both Google Home and Amazon Alexa to my house. After a couple of years living with both voice control systems, I ended up picking the Amazon Alexa ecosystem to be the winner to control my whole home going forward. Since then, I have added Ring doorbell and Blink security cameras into the mix.

Of course, nobody has to point out the irony that by adding security cameras I am once again stuck with pulling out my mobile device to see the video feed. Very impractical.

For the longest time I was using the Amazon Echo Dot ecosystem to pick up my voice commands. In fact, I use four of them around the house. They are very good for what they are, but their sound quality is abysmal. I started employing Sonos to do the voice command pick up as their sound quality is leaps and bounds better than the Echo Dots, but they are pricey. So I have to find a better solution.

The above was the reason I started checking out the Amazon Echo Show series to do such tasks. Alas, all the previous versions of Echo Show failed considerably in satisfying me. The small screen and bad sound quality don’t help a bit. So imagine my excitement when I saw the Amazon Echo Show 10 introduced on my Amazon Canada landing page. At that very moment I contacted Amazon to request a review unit when it becomes available. From the description, the Amazon Echo Show 10 isn’t just Amazon’s best smart display, it’s the most innovative, the most sophisticated, and the best-sounding smart home hub ever. The brushless motor that almost silently spins its 10.1-inch HD display around a 350-degree arc is the feature that will grab your attention when you take it out of the box, but you’ll quickly discover many more things to drool over when you set about exploiting its capabilities to the fullest.

Let’s start with the most basic: sound quality. While it doesn’t reach the quality of my Sonos One and Sonos Move, it does sound very good for the price. It’s outfitted with a pair of one inch front-firing tweeters and a substantial three inch woofer that pumps bass out the top of its squat, cylindrical enclosure. I didn’t get a good sense of stereo separation, but then again, that’s not its intended purpose. If you want good stereo separation, get a pair of speakers. But for background music, phone conversations, listening to YouTube and Netflix, it is very good.

Display quality is much improved on this model compared to any of the Echo Show I have tried (and owned) in the past. It’s not only brighter, but Amazon has added the ability for the display to adjust its brightness and colour to adapt to the ambient lighting in the room. For somebody who lives and breathes colour accuracy, this feature is a great step to the right direction. Of course, you can’t expect for the light sensor accuracy to be as accurate as my $30,000 light meter, but I’d be foolish to expect that. For the price and what it’s meant to do, the Echo Show 10 is very good and highly effective.

What I need most from an Echo Show is the security feature. I want to be able to see the image from my Ring and Blink without wasting precious seconds getting my phone or tablet, turn it on, search for the app, open the app, and then talk to the person outside my house. And this Echo Show eliminated the need to do so, as I can “train” it to automatically open the related app and I can just talk right away. Because the screen size is large enough, it’s a far better experience than using my phone.

This is my most favourite feature of the Echo Show 10. It follows me wherever I move within its range. I set up the Echo Show on my dining table and found that its tracking feature worked well and smoothly as it followed me moving around the dining room. If the room is too dark, however, the Echo will display a message that reads “Motion is unavailable because lighting is low.” And while it can spin 175 degrees in each direction, it will reverse and rapidly swing the other way when it reaches the end of either range. In the real-life application, I put the Echo Show 10 closest to the wall and manually restrict the swing (by programming it) to less than 60 degrees each way. This way the Echo Show 10 will never hit the wall or facing areas that no one in the house will ever use.

While some may find this feature to be creepy, I have no problem with it at all. I find it to be a very cool since I no longer have to keep changing the Echo Show’s physical location every time I move around (something that I had to do, quite often, when I was using my Echo Show 8). The only drawback is that while the screen can rotate in its horizontal axis, it won’t angle up and down in its verticals. It doesn’t bother me at all, but I wish that this is the case.

My verdict? As I’m sure you know from reading my review that I love the Amazon Echo Show 10. It’s near perfection in all the qualities I need from a home hub with a display. Sound and video qualities, fun factor, the large-enough screen size and the ability to follow me, are immaculate. I really can’t fault this unit at all. With the exception I mentioned above (the ability to automatically tilt the screen), I have finally found what I’m looking for, and I highly recommend you get this unit if you’re serious about your home hub.

Posted by by John Thomson 18 hours Ago