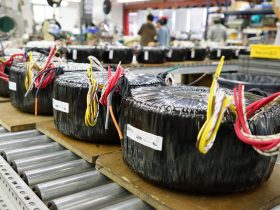 Do Audiophile Cables and Power Conditioners make a Difference?

Dyson has not only expanded into the headphones space, but the company is also bringing its expertise to that market with a pair of headphones, the Dyson Zone, that function as a wearable air purifier as well. The design is sure to turn heads and likely garner some polarizing opinions.

The Dyson Zone air purifying headphones both let you listen to audio from a Bluetooth connected mobile device or other audio source as well as capture city pollution like gas, allergens, and particulate matter. The headphones also feature advanced noise cancellation and “high fidelity” audio.

The design includes a pair of over-ear headphones with a piece that wraps around to the front of your face to provide purified airflow to the nose and mouth. The idea is to tackle both noise and air quality pollution at the same time. While five years ago, the idea might have sounded ridiculous, in this day and age where wearing a mask has been commonplace in public spaces, and continues to be, for the last few years due to COVID-19, it might not be so far-fetched.

The idea is that breathing in bad air is going to be a concern long after COVID-19 becomes a distant memory, or at least a less severe threat. According to the World Health Organization (WHO), cited by Dyson, nine in 10 people globally breathe air that exceeds WHO guidelines for pollutant limits. And while NO2 pollution actually decreased in cities due to COVID-19, now as people are getting out more often and getting rid of masks, the levels have begun to return to normal and even, in some cities, exceeding pre-pandemic levels. Meanwhile, WHO, cited by Dyson, says more than 100 million people or 20% of the European population is exposed to long-term noise exposure that sits about the organization’s guidance. In Canada specificially, pollution exceeds WHO PM2.5 guidelines by 1-2 times.

“Air pollutions is a global problem,” says Jake Dyson, Chief Engineer. “It affects us everywhere we go. In our homes, at school, at work and as we travel, whether on foot, on a bike, or by public or private transport. The Dyson Zone purifies the air you breathe on the move. And unlike face masks, it delivers a plume of fresh air without touching your face, using high-performance filters and two miniaturized air pumps.”

The compressors in each earcup draw air through the dual-layer filters and project two streams of purified air to the wearer’s nose and mouth, channelled through the non-contact visor. Sculpted returns on the visor ensure purified airflow is kept near to the nose and mouth and diluted as little as possible by external crosswinds.

Interestingly, when it was first developed, the Dyson Zone was a snorkel-like clean air mouthpiece paired with a backpack to hold the motor and inner workings. Developing a non-contact solution was a must for Dyson engineers, to avoid the discomfort and irritation often associated with full-contact alternatives. The visor, therefore, was a critical element. The airflow pathways and visor design are central to delivering pure air. The geometries of the visor and the visor returns, alongside the central mesh that diffuses the two jets of airflow, ensure that the purified air exiting the filters is effectively delivered to the nose and mouth in crosswinds, and for the wearer’s specific facial shape.

Dyson engineers use a breathing manikin fitted with medical-grade mechanical lungs and sensing equipment, which ‘inhales’ pollution replicating human breathing patterns in a controlled chamber. They then measure the pollution level within the nose and throat to determine the filtration efficacy of those particles which would otherwise end up in Frank’s artificial lung.

Precision-engineered compressors within the earcups draw air through the dual-layer filters, intelligently designed to fit within the considerable space constraints of a headphone. The negatively charged electrostatic filter media captures ultrafine particles such as allergens, and particles from sources such as brake dust, industry combustion, and construction whilst a potassium-enriched carbon layer captures city gas pollutants like NO2 and SO2. The compressor channels the purified air to the wearer’s nose and mouth via the contact-free visor, formed with flexible returns that to channel the flow of purified air to the wearer’s nose and mouth.

For audio, Dyson engineers developed a high performing neodymium electroacoustic system within each earcup. A wide frequency response, precise left-right balance and distortion significantly below what can be detected by the human ear, offer a faithful reproduction as the musicians or creators intended.

Large, angled ear cushions mould around the listener’s ear, with a foam density and headband clamp force engineered specifically for both comfort and optimal noise reduction. Taking inspiration from the shape and design of a horse’s saddle, the Dyson Zone is engineered to distribute weight over the sides of the head, rather than on the top. A saddle typically curves over the horse’s spine distributing the load through contact with the areas left and right of the backbone, a format used for the central cushion on the headband, Dyson explains.

The Dyson Zone air-purifying headphones will be available in select Dyson markets online and in-store at Dyson.com and Dyson Demo Stores from Spring 2022. Full product specification and further details on availability will be announced in the coming months.