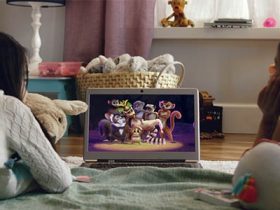 OUR KIDS (AND GRANDKIDS) MAY NEVER KNOW CABLE OR SATELLITE TV

Never has a finely tuned smartphone with everything but the kitchen sink arrived at the worst time – in the middle of a global pandemic where conservative spending is the new norm. That is Samsung’s dilemma with the release of its much-awaited flagship smartphone, the Galaxy Note20 Ultra 5G in stores today for $1820 outright. Its less equipped sibling, the Note20 5G ($1,400) plays second billing but has earned its own spotlight for switching to a plastic back cover.

I have used every Note series as my working phone since 2012 because of its included S Pen. A slender digital stylus neatly tucked inside the phone and a constant companion for jotting down notes, scribbling, even giving my finger a rest, accurately tapping away when browsing. Then, the first Note was called a Phablet, bridging phones and tablets and was even mocked for its “huge” 5.3” AMOLED display. It became the forerunner of today’s much larger phone screens.

The Note20 Ultra sports a 6.9” screen to a maximum resolution of WQHD+ 3,088 x 1,440 where pixels simply disappear at 496 ppi. It also features a maximum refresh rate of 120 Hz which can be set manually, consuming more battery power or smartly set to adaptive mode where it varies the refresh rate from the base 60 Hz and up depending on what you are doing. Casual use like browsing or texting uses 60 Hz. Quickly scrolling the screen bumps up to a faster refresh rate and is most noticeably improved in gaming. 120 Hz is not supported in the highest WQHD+ setting.

The Note series has been part of Samsung’s tick tock strategy launching six months apart from the “other” S series phones. I find the two phones have been increasingly sharing more technologies, except the S Pen, of course. The same camera sensor technology that’s in the S20+ Ultra 108 MP, which launched in February, is also on the Note20 Ultra.

The 4,500 mAh battery will easily last until the next day for most users, but when I tested the Note 20 Ultra, shooting pictures and 4K video alI day, I had to re-charge it after six hours of constant use. Needless to say, the precision finish on this phone combining Gorilla glass and metal is beyond reproach. The new Mystic Bronze plays on an all time attraction classic colour associated with quality. It’s also available in Mystic Black in Canada.

Also worth noting: that camera housing hump is awful and is looking for a bruising . As much as this phone is pleasing to hold and feel, investing in a decent phone case will pay off.

A long-time Samsung partner, Microsoft makes the Galaxy Note20 Series 5G and your Windows PC work together seamlessly, like syncing your Samsung Notes to Microsoft OneNote and Outlook. You can quickly scribble notes before you unlock your Note20 and take screenshots with a simple flick of the wrist.

The new S Pen has 80% latency improvement (down to 9ms) over the Note10 which is why, try as I might, I could not write faster on the screen with the S Pen. Samsung Notes features auto-save so you can pick up right where you left off as you move from device to device. It even straightens quick handwritten thoughts into legible penmanship! You can annotate and highlight PDFs in the Samsung Notes app too and record audio as you jot down ideas, and just tap a word in your notes to go to that moment in the recording. New intuitive folder management that makes everything easier to find.

The Note20 Ultra finally catches up with the extensive shooting features of the S20+ Ultra, now six months old and then some.

Like the current S20 series, the Note20 Ultra shoots superb 8K Video with Video Digital Image Stabilization and while shooting lets you take 33MP still photos while playing the 8K video back. The Zoom-In-Mic that records louder as you optically zoom say, into a waterfall, is excellent.

Cinematic Filmmaking goes up another notch with the Note20 Ultra. With 21:9 aspect ratio and 24fps recording, the 8K camera on the Galaxy Note20 Series 5G now gives you ultra-high resolution and a professional quality video experience. Use powerful Pro Video mode with pro-grade focus, audio, exposure, lighting, zoom speed control, and 120fps shooting at FHD options for cinematic-style videos. Pro lenses and advanced Space Zoom allow you to photograph scenes in gorgeous detail, compared to zooming with other non-8K capable phones. You can also control audio sources on the Galaxy Note20 Series 5G, adjusting and selecting between onboard mics or external sources, so the sound you want comes through clearly. Paired with Galaxy Buds Live, for example, you can record crystal-clear audio even with some noise in the background.

HOW DOES THE NOTE20 ULTRA COMPARE WITH HUAWEI’S P40 PRO

Today no camera phone is best in all types of photography. You pick and choose on the kind of pictures you take.

OTHER UNIQUE FEATURES OVER THE COMPETITION

Microsoft’s integration with the Note20 is deep. Easily access your mobile apps directly from your Windows 10 PC  and conveniently send messages, manage notifications, sync photos, and make and receive calls all from your Windows 10 PC. Add your favourite mobile apps to your Windows Taskbar or Start menu so you don’t have to search your phone for favourite social media apps and Gallery. Later this year, you will have the ability to run multiple apps side by side on your Windows 10 PC. Align productivity ecosystems across compatible devices by syncing to Microsoft OneNote and Outlook, or sync your Reminders with Microsoft Outlook, To Do and Teams so your files are at your fingertips, no matter where your work takes you. Very cool stuff.

I didn’t get to try this yet, but beginning September 15, you can play your favourite Xbox games on Galaxy Note20 Series 5G. That’s  more than 100 Xbox games on your phone or tablet, directly from the cloud (beta) with Xbox Game Pass Ultimate including hits like Minecraft Dungeons and Gears 5. How about latency over a phone? The Galaxy Note20 Series 5G gaming experience is enhanced with its AI game booster, Bluetooth audio response optimization, and 240Hz touch latency on the Galaxy Note20 Ultra 5G. With hyper-fast 5G and Wi-Fi 6 you will get optimized gaming latency in every level and battle.

Samsung’s DeX technology allowing you to run your phone on a large monitor has new features too. With Samsung DeX wirelessly connect your Galaxy Note20 5G or Note20 Ultra 5G to a compatible Smart TV when you need a bigger screen. Manage two screens simultaneously, so you can text with your friends while watching a video on a compatible Smart TV.

Another first for a Note device, Ultra-Wideband (UWB) technology makes it easy to share photos and videos. Simply point your Galaxy Note20 Ultra 5G to another UWB-enabled Galaxy device and the Nearby Share feature will automatically identify the people you’re facing at the top of your sharing panel.

See the complete list of features on more Galaxy products, check out more on the Galaxy Watch 3 and Buds Live and feast on all the Galaxy Note20 5G series specs.