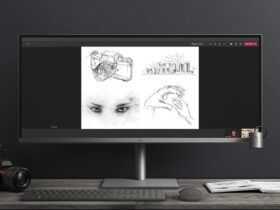 Fifty years ago, Japanese watch manufacturers Seiko and Citizen started experimenting with solar cells as a power source to drive their LCD watches.  In the 1990s Citizen sold a line of light-powered watches under the banner Eco-Drive.  By the mid-2000s, Casio, another Japanese watch manufacturer, added solar power to their popular Pro Trek line of adventure watches.  I have a Casio Pro Trek that sits on a windowsill when not on my wrist and it has never lost time in more than a decade thanks to that solar cell.

When we think of solar panels and consumer electronics, most of us will think of those little cells that power $10 calculators and after that, we would be hard-pressed to think of another consumer product that relies, or at least enhances battery management, through the sun.  Have you ever seen a smart phone or laptop with a solar panel?  Not that I can think of. Sure, we have seen some portable Bluetooth speakers from companies like Eton and Braven add panels to their speakers intended for the beach, but where is the wide-spread adoption? Seriously, if we are not talking about pandemics in 2022, we are talking about climate change and our need for alternative energy sources.  So why are we not seeing solar panels on everything?

Perhaps that’s about to change.  Just before the Christmas holiday, Canadian distributor Erikson Consumer shipped me an over-the-ear headphone by Stockholm-based headphone manufacturer Urbanista, called the Los Angeles, that you guessed, is powered in part by a solar panel embedded in the headphone’s headband.  We have covered Urbanista for many years and have always admired their slick industrial design and attachment to hip city and urban living. Urbanista has a history of marrying style with performance and with the release of the Los Angeles, they are doing a great job becoming the Tesla of the headphone business.  Could this be the disruptor product we have been waiting for? If not a disruptor at the very least a manufacturer fully aware of the climate challenges that we face.

Urbanista claims the Los Angeles is the world’s first self-charging wireless headphone and uses a solar cell material called Powerfoyle to convert all light, both indoors and out into energy.  So, while other headphone manufacturers talk about 15 or 20 hours of playback battery life, the Urbanista Los Angeles has a virtually infinite playtime so long as you are in daylight. Outside of daylight, the headphones have an 80-hour internal reserve 750 mAh battery.

Powerfolye is a product from another Swedish company called Exeger, who developed this solar cell technology after 12 years of R&D to be resilient enough for adventure sports.  In addition to Urbanista, Exeger has also worked with Adidas and POC, a company that specializes in extreme sport crash helmets for cycling and skiing.  By incorporating Powerfolye cells in the POC “Omne Eternal” cycling helmets, POC can integrate safety lights directly into the helmet for greater visibility. The lights never need a charging wire, and they turn on automatically when the user puts the helmet on.

The secret sauce of Powerfoyle is that the material doesn’t look like a traditional solar panel.  Exeger calls this “hide-tech” and says their panel can be custom-made into almost any shape and can mimic the look and feel of other materials such as fabric or leather.

The Powerfoyle embedded into the band of the Urbanista Los Angeles has a matte black finish and looks nothing like what you expect a solar panel to look like.  It simply blends into a well-designed attractive headphone that marries to the colour of the black headphones. If you weren’t told, you’d never know that the headphones are solar powered.  The Los Angeles comes in two colours; matte black and tan. On the tan model, the solar panel remains black, so go for the matte black model for a more integrated look.

To test the Urbanista Los Angeles, I picked a perfect blue-bird day and proceeded to climb 3000’ to the summit of Mont Tremblant.  A sunny day in Tremblant usually means -15 degree Celsius temps, so I welcomed the chance to try out over-ear headphones for the added warmth!  The Los Angeles runs on Class-2 Bluetooth 5.0 and is compatible with both Siri and Google Voice Assistant.  Pairing, as you would expect, is a breeze and within minutes I had my Spotify motivational playlist of songs designed to inspire skiing up a mountain.

I started my journey in ambient sound mode that allows for added awareness to your surroundings, but after 15 minutes of my heavy breathing, I switched over to active noise cancellation that helped drown out my suffering. I expected the extreme Laurentian cold to test the headphone’s battery chops yet after two hours of climbing the battery life remained at 92%.  Urbanista says that one hour of direct sunlight adds three hours of playback, hence the infinite battery lifespan when in the sun.

The earcups are high-density foam covered in a vegan leather.  Analogue buttons on the right earcup control power and volume.  Song selection is controlled with your listening devise and not with a swipe motion to the headphone -some may view this as an inconvenience but lately I am happiest when headphones focus on being headphones and not a complete sound system. You could also use voice assistant if you don’t like buttons. On the left cup is a single button that allows you to toggle between ambient, active noise cancellation and regular listening mode.  The band has excellent cushioning but in a minimal Scandi-cool way versus, say, American Lazy-Boy plush cushioning.  If anything, the band might be a bit too snug which may have something to do with the solar panel or it may be that these headphones still need a break-in period.  While alpine touring up a mountain, I never fiddled once with the positioning of the headphones, so being snug when in motion is a good thing.

The Urbanista Los Angeles comes with a carrying sleeve that I suspect has been designed to allow the sun to still hit the solar panel even when stored.  The headphones come with a USB-C charging wire but for the sake of this review, I only used the sun to power the headphones and I have yet to drop below 90%.  How I know the battery percentage is via the Urbanista app, which for me is the only weak link of the experience.  Other than seeing battery percentage, the app doesn’t do much else – no EQ or sound pre-sets.  That’s OK, 2022 is the year I am shedding apps and will be happy ditching this one in favor of the sun.

As you expect in a $300-range headphone, sound quality is excellent with no exaggerated sound stage.  Like the Swedes themselves, the headphone performs while being modest and understated.  That the Urbanista Los Angeles is powered by the sun should have every other headphone manufacturer sitting up and taking notice.  Tesla makes all gas-powered cars feel old and dated.  These headphones have the capacity of making all other headphones feel like they are behind the times too.

Wifi Hifi 5-stars based on great design, superb sound and being the first with solar cell technology.  Time for everyone else to catch up.