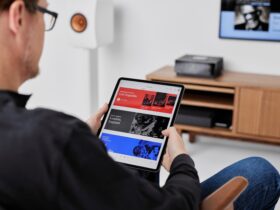 iFi Audio has introduced its new ZEN Phono stage, an entry-level phono stage or phono preamplifier that is designed for those who have been recently diving into vinyl for the first time, or getting reacquainted with the format.

The ZEN Phono incorporates a circuitry with a balanced, symmetrical dual-mono design that can reduce noise and crosstalk, thus increasing sonic clarity, says iFi. The design has been championed by renowned high-end audio electronics engineer John Curl, whose analogue amp designs, including several landmark phono stages, have been lauded since the 1970s.

In common with many iFi audio products, the ZEN Phono incorporates a custom OV Series op-amp – in this case, the OVA2637.

The ZEN Phono creates a power supply with an oscillation frequency of 1.2MHz, which is 20,000 times that of mains electricity. In this circuit, a filtering capacitor with a 10uF rating is equivalent to 200,000uF at lower, audible frequencies. The power supply circuitry is located on its own ‘island’ on the circuit board to ensure there is no contamination of the audio signal – just super-clean +/-12V DC.

Also not usually found in an entry-level phono stage is a subsonic filter, engaged via a front-panel button to tackle the large subsonic signal output caused by warped records. A feature of all iFi phono stages, this proprietary circuit ‘intelligently’ filters out the unwanted subsonic output without affecting any deep bass on the recording – an undesirable side effect of some warp filters.

Vinyl cutting lathes incorporate a so-called ‘elliptical filter,’ which means that low-level bass on an LP is invariably mono and creates only horizontal movement of the stylus. Therefore, any low-frequency vertical movement of the stylus as it tracks the LP can only be the result of record warp. iFi’s subsonic filter removes the effect of record warp from the vertical plane, doing its job efficiently without the common drawbacks of attenuating any low bass or adding group delay.

As well as the usual stereo RCA inputs and outputs, gold-plated for optimal signal integrity, the ZEN Phono’s rear sports a 4.4mm Pentaconn balanced output. This can be used to connect to an amp or active speakers equipped with a balanced input – either a Pentaconn 4.4mm input, such as the one found on the ZEN CAN analogue headphone amp, or XLR inputs via an adapter.

A grounding terminal is also provided; attach a turntable’s grounding wire to this to avoid ground loop issues that can cause an audible hum. Even the way the ZEN Phono switches between settings has been engineered to ensure sonic transparency, handled by a microcontroller that only ‘wakes up’ when a setting is changed to avoid any sonically deleterious electronic noise.

The ZEN Phono is the fourth product to join iFi’s ZEN Series. It is available in Canada through iFi’s Canadian distributor Motet Distribution, for $249.