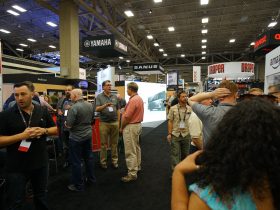 Got AstraZeneca and Wondering About Attending CEDIA? Here’s What You Need To Know

Set to launch in Canada in October 2021, the UltraGear Gaming Speaker is a key component of LG’s strategy to expand its UltraGear ecosystem with innovations for gamers. The speaker boasts LG’s proprietary 3D Gaming Sound technology that incorporates a specially designed HRTF (head-related transfer function) algorithm to tailor a game’s audio according to genre. This results in a detailed virtual surround sound, says LG, and a “realistic sense of space, position, and directionality,” all without the need to wear a headset.

The GP9 also features Game Genre Optimizer with two modes that can customize game audio to match what the user is playing. FPS Mode allows first-person shooter game fans to hear the smallest of details, allowing them to react even quicker to an enemy stealthily closing in on their position. RTS Mode, meanwhile, ramps up the realism with genuine spatial sound that can immerse players in their favourite real-time strategy (RTS), racing, and other games. With support for DTS Headphone:X, the LG UltraGear Gaming Speaker can provide convincing 7.1 virtual surround sound when using headsets or earphones as well.

﻿But even without a separate headset or mic, gamers can communicate with other players thanks to the built-in mics that employ LG’s echo-cancellation algorithm that can distinguish a user’s voice from game sounds and background noises. The advanced speaker can also perform the role of the discrete sound card many PC gamers prefer. Gamers can download professionally tuned EQ settings via a companion app and share custom sound settings for specific games with other gamers.

The LG UltraGear Gaming Speaker is Hi-Res Audio certified, offering higher sampling rates and a richer, more complete reproduction of original sound during gameplay. There’s also a built-in Hi-Fi Quad DAC (ES9038PRO) so when the speaker is connected to a PC, it can deliver premium sound.

Meanwhile, for listening to music, podcasts, or other audio beyond gaming, the LG XBOOM 360 speaker (model RP4) features a conical-cylindrical design to deliver omnidirectional audio, radiating sound in all directions. The conical-cylindrical shape accommodates the distortion-free reflector structure of the speaker, which delivers 360-degree sound with minimal distortion.

The LG XBOOM 360 also features 360-degree mood lighting with three presets – Ambient, Nature and Party – as well as a range of customizable lighting options and sound effects when used with the companion app. There’s also a DJ Effect feature in the app that allows for the mixing of multiple samples as well as scratching and other sound effects.

The speaker offers 10 hours of listening per charge, includes a built-in metal handle, and comes in a durable fabric cover in burgundy. It is partially made from recycled plastic and other post-consumer materials, and, like the UltraGear Gaming Speaker, has received Eco-Product certification from SGS Société Générale de Surveillance SA of Switzerland as well as Environmental Claim Validation from Underwriters Laboratories, and Global Recycled Standard recognition from Control Union Certifications.