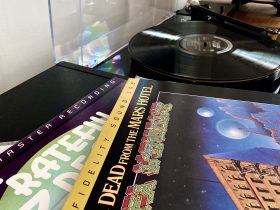 If You’re Not Streaming, You’re Listening To Vinyl

When the television first became common in households in the ‘50s, it was a marvel to be able to see a moving image on the tiny, black and white screen. Households began to watch content terrestrially, then cable and satellite television afforded access to hundreds of channels. Add things like on-demand and pay-per-view TV, along with VCRs and DVD players to the mix, and we were in entertainment heaven.

Then came streaming TV to shake up the landscape. Pay one nominal monthly price that varies only in terms of desired video quality, and access a plentiful library of content, included legacy network series, movies, and original fare that might never have seen the light of day if the only option was to fit it into a television network’s limited prime-time schedule. All you need for access is a reliable and ample Wi-Fi package. Then, seamlessly watch on a large, flat-screened TV, or from mobile devices as well, anywhere and anytime, using both Wi-Fi and cellular connections. It was glorious.

Traditional networks caught on and started to offer their own rival services. And some have done quite well. HBO has HBO Now and just launched HBO Max, CBS has CBS All Access, CTV has CTV Go, and the list goes on. The Disney+ service is home to tons of Disney content going back decades, along with new projects while Apple TV+ offers its own slate of compelling originals. Add Quibi, YouTube, Facebook, and others to the mix and the options are plentiful.

Meanwhile, traditional TV powers on (pun intended), offering up new and legacy programming, sports, local and global news, awards shows, and other live content. Yet subscriber numbers are dwindling. So much so that our children and grandchildren may never know what it’s like to pay for or use a traditional TV service.

According to MRI-Simmons research, more than 30 million Americans have never paid for traditional TV. These “cord-nevers” are presumably saving money since they aren’t dolling out at least $100/mo. for a cable or satellite TV package. Instead, they’re spending $10-$20/mo. to access a streaming service, plus the cost of Internet service (though that would be considered an essential service with or without TV anyway.)

This means that 12% of the adult U.S. population falls into the cord-nevers category, referring to the fact that they haven’t “cut the cord” on cable and shifted to streaming, but rather never had cable to begin with. This represents an increase over the 2017 level of 9%. With a median age of 33, firmly within Millennial territory, the typical average household income of a cord-never has risen by 27% over the last two years, from US$41,500 to US$52,800.

Interestingly, the tide could be turning. Among cord-nevers, 27% or about 8 million adults, say they plan to sign up for a pay-TV service in the next six months. Some 70% of these cord seekers, as MRI refers to them, say they will subscribe to a traditional (cable, fiber optic, or satellite) service, while 30-41% of 18-to-34-years-olds expect to acquire a streaming TV package, such as Hulu with Live TV, DirectTV Now, or Sling TV.

It seems that cord-nevers might be missing some of the traditional payTV features that they don’t get with streaming, and maybe never even experienced before, such as the ability to channel surf, cited by those in the 35-to-49 and 50+ age groups, and the ability to quickly and easily find shows (presumably by knowing when they’re on versus scrolling through an endless list of titles). The latter was cited most by young adults aged 18-34.

There are options that quench these thirsts, such as LG’s ChannelPlus, which aggregates streaming content into a traditional TV guide format so you get the satisfaction of “channel surfing” while looking at “what’s on” everywhere from YouTube to Funny or Die and over-the-air channels, in one spot. Or Roku media players with their various channels and other media boxes. Meanwhile, many streaming services work with voice commands through platforms like Roku players or the Apple TV so you can just ask for the show you want. It doesn’t get any quicker or easier than that.

“Young people used to say that, as soon as they got their first well-paying job, they would sign up for the full suite of traditional TV services,” says Karen Ramspacher, Senior Vice President, Innovations & Insights at MRI-Simmons. “Today, there are many more options for connecting to video content, so competition for these subscription dollars is fierce. As they grow in numbers and wealth, today’s cord nevers definitely represent an opportunity for content providers – but understanding the nevers’ underlying motivations is essential to targeting them effectively.”

So perhaps there is hope yet for cord-nevers to become cord-maybes, or even cord-possibles. They might one day know the feeling of endlessly clicking a button to browse through a channel guide (though admittedly, many can satisfy this craving by scrolling through genre categories and titles in streaming service menus), recording content to a PVR, watching live programming with bathroom breaks only allowed during commercials, and enjoying live local sports or news. They just need the right motivation.

In addition to the reasons cited above, 23% of those 18+ said they’d subscribe to payTV service if they could get a good deal on a package, while 30% of those 18-34 said this, 10% aged 35-49, and 15% of those aged 50+. Other reasons noted were that subscribing to pay TV services is the only way to access the TV networks they want to watch, a desire to watch live news and live programming when it airs, and having a DVR/PVR. Perhaps selecting only the programs you want to watch offers a higher level of perceived control than a universal selection of programming, personalized recommendations or not, that young viewers are seeking.

The MRI Survey of the American Consumer was based on 24,000 in-person, in-home interviews in the U.S, so it’s unknown if the results would be similar in Canada. We do have fewer streaming options north of the border but that is quickly changing. And we continue to pay relatively high prices for traditional linear TV packages, which customers are quick to fret about whenever given the chance. A Bell Fibe TV package that’s $94.90/mo., for example, includes a bundle with both access to TV as well as 50Mbps Internet service. And that only includes major network channels like CBC, CBS, CityTV, ABC, Fox, CTV and Global. If you want premium channels, like HBO to watch Game of Thrones, you need to pay an additional $25/mo. to get access to the premium network, along with others like Showtime, Starz, and access to Bell’s Crave streaming service. Plus, there’s PVR rental (or purchase fees) on top of that, and a one-time installation charge. Is it worth it?

For most people of the younger generation, it isn’t. But, as noted, they’re starting to show signs that something’s missing with streaming – something they know their parents or grandparents enjoyed, and something older Millennials might even recall experiencing themselves as young children. Maybe there’s a level of nostalgia there – the same one that has sparked the new vinyl revolution, and a renewed interest in things like retro gaming. Or maybe not.

If the results of the study are any indication, “kids of today” may eventually understand what it’s like to subscribe to a service that affords hundreds of channels through which you can scroll, 90% of which you never watch, and that doesn’t require Internet service to work. But for now, streaming is king.

Decades from now, cable or satellite TV may just be part of the historical stories we recall to our kids, similarly to how older folks today wax nostalgic about the big, clunky black and white television sets they had in their living rooms, or how the family hovered around a radio to listen to their favourite shows. “When I was young, we used to have choose from hundreds of TV channels and programs, and manually record the ones we wanted to watch. An algorithm didn’t predict our interests and create curated, individual channels just for us like we have today…” Ahh, the good ‘ol days.