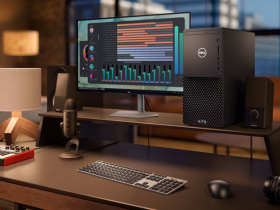 The latest candidate in our series of Q&As with influential women in the technology business is Cat Kom, Founder & CEO, Studio SWEAT, Studio SWEAT onDemand, an online fitness platform.

Years in the Industry: 11 Years

The Quote That Most Inspires You: I could never pick just one, but my most recent favourite is Winston Churchill’s “If you’re going through hell, keep going.” It’s so simple and well said. To me it speaks to having resilience and grit. We’re going to get knocked down, we’re going to get burned, we’re going to experience times that are tough. Those times are exactly when we need to press on. I mean what’s the alternative – stay knocked down? No thanks.

In my college years, I was a struggling new mom looking to find a way to support my family, and that meant putting my original plans on hold. The tech field seemed perfect for me, as it did seem to pay well, and the University of Washington had just added IT as a focus for Business Admin majors which was exciting. In the end, it worked out amazingly, because I was able to marry my passion for fitness with my skills and training in IT.

As a young woman in a largely male-populated field, you have to accept and adjust to the fact that you’re probably going to be the only female in the room most of the time. Now, I’ve never been big on complaining, I most often just deal with whatever situation I’m in and focus on what I can do. So I had to work a little bit longer and try a bit harder to prove myself. So, I did. Although, I will say with more and more young women entering the tech field, the situation is improving.

I think that my perspective as a woman influences how I run my business. I own my mistakes; if I don’t know something, I’m comfortable saying that I don’t and seek a solution; and I have always had an unstoppable work ethic — most people might assume that I ‘work out’ for a living, but the truth is that I spend most of my time working on production, technology, and the marketing side of things. I work out no more than anyone else that’s dedicated to their fitness routine. Which reminds me, I’m driven, I’m diligent, and I am a strong believer that an idea without execution is simply an idea.

I think the more we shine a light on the current female tech leaders we have, the more we’ll inspire the next generation of young women. It’s never easy to step into a field where you don’t see that many role models that resemble yourself, so the more we promote these trailblazing boss ladies, the more we’ll encourage — it’s a positive feedback loop.

So, you’re a woman in the tech industry, that just means you stand-out. Make that a good thing.

Truthfully, any woman in tech inspires me. But if I had to narrow it down, I’d say my first boss, Bonnie. She’s the only female boss in IT that I’ve ever known, and she was everything you could hope for. She dressed for success; she was as sharp as a tack; she could own any room without dominating it; and she was firm while being kind. And she knew exactly what I was going through as a young woman in tech.

The same myths facing a lot of males in tech, to be honest. Namely, that we’re all nerdy recluses. But also as women, that we’re just not equipped to handle the job. But in my experience, I feel like women are even more capable of thinking outside the box to find creative solutions. I can sling if-then statements all day long and don’t even get me started on complex workflow. All…Day…Long!

I wish the industry was more standardized. That is, I wish that we didn’t have to develop unique solutions for an almost unmanageable amount of different devices, that all speak different languages. And I know that there are some (unnamed) big players that want to keep it that way, but it does make everything more difficult and expensive, which gets passed along to the consumers. Plus, it makes our technology more prone to having more issues.

Of course I am! Our industry has grown so much, particularly so in the past few years, and there are always new and exciting developments that are making all our lives easier. And especially for women, who are really growing in this field and finding their voices in a big way.