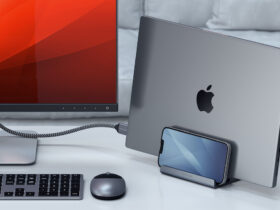 Along with the new MacBook Pro models, Apple unveiled a new Mac Mini, all of which will be powered by the new M2 Pro and M2 Max SoCs (systems on a chip) that allow for greater power efficiency along with a host of other upgrades.

Apple’s M2 Pro scales up the architecture of M2 to deliver an up to 12-core CPU and up to 19-core GPU, together with up to 32GB of fast unified memory. M2 Max, meanwhile, includes an up to 38-core GPU, double the unified memory bandwidth, and up to 96GB of unified memory. Both chips also feature enhanced custom technologies, including a faster 16-core Neural Engine and Apple’s powerful media engine. M2 Pro can be found in the Mac mini and M2 Pro and M2 Max in the new 14- and 16-inch MacBook Pro models.

Built using a second-generation 5-nanometer process technology, M2 Pro consists of 40 billion transistors, which is nearly 20% more than M1 Pro, and double the amount in M2. It features 200GB/s of unified memory bandwidth, twice that of M2, and up to 32GB of low-latency unified memory. The next-generation 10- or 12-core CPU consists of up to eight high-performance cores and four high-efficiency cores, resulting in multithreaded CPU performance that is up to 20% faster than the 10-core CPU in M1 Pro. Apps like Adobe Photoshop run heavy workloads faster, and compiling in Xcode is up to 2.5x faster than on the fastest Intel-based MacBook Pro.1

The GPU in M2 Pro can be configured with up to 19 cores, three more than the GPU in M1 Pro, and includes a larger L2 cache. Graphics speeds are up to 30% faster than that of M1 Pro, which Apple says results in increases in image processing performance and enabling console-quality gaming.

With 67 billion transistors, 10 billion more than M1 Max and more than three times that of M2, M2 Max has 400GB/s of unified memory bandwidth, which is twice that of M2 Pro, 4x that of M2, and supports up to 96GB of fast unified memory. Massive files can open instantaneously, says Apple, and working across multiple pro apps is quick and fluid.

M2 Max features the same next-generation 12-core CPU as M2 Pro. The GPU is even more powerful with up to 38 cores and is paired with a larger L2 cache. Graphics speeds climb up to 30% faster than M1 Max.

Featuring the new M2 and M2 Pro processors, the new Mac mini, which starts at $799, delivers faster performance, more unified memory, and advanced connectivity, including support for up to two displays on the M2 model, and up to three displays on the M2 Pro model.

Paired with Studio Display and Magic accessories, along with macOS Ventura, Mac mini is the ideal new machine for those who want a desktop experience. It is available for pre-order now and will begin shipping Tuesday, January 24.

Compared to the previous-generation Mac mini, M2 and M2 Pro bring a faster next-generation CPU and GPU, much higher memory bandwidth, and a more powerful media engine to Mac mini. Both models feature an advanced thermal system for sustained performance.

Mac mini with M2 features an 8-core CPU with four high-performance and four high-efficiency cores, along with a 10-core GPU. For users with more intensive tasks, Mac mini with M2 offers up to 24GB of unified memory and 100GB/s of bandwidth so activities like image editing in Adobe Photoshop are up to 50% faster1 than the previous generation. M2 also adds ProRes acceleration to Mac mini, so tasks like video editing in Final Cut Pro are more than twice as fast.1 The M2 model can also simultaneously play up to two streams of 8K ProRes 422 video at 30 fps, or up to 12 streams of 4K ProRes 422 video at 30 fps.

M2 Pro brings pro-level performance to Mac mini with up to a 12-core CPU with eight high-performance cores and four high-efficiency cores, along with up to a 19-core GPU, M2 Pro has 200GB/s of memory bandwidth, double the amount in M2, and supports up to 32GB of memory. The next-generation Neural Engine is 40% faster than M1, speeding up ML tasks like video analysis and image processing. Designed to dramatically accelerate video playback and encoding while using very little power, M2 Pro offers a powerful media engine, which speeds through the most popular video codecs and can simultaneously play up to five streams of 8K ProRes 422 video at 30 fps, or up to 23 streams of 4K ProRes 422 video at 30 fps. The M2 Pro-powered model is up to 14x faster than the fastest Intel-based Mac mini.3

With M2 Pro on the new Mac mini, you can run high-performance workflows that were previously inconceivable in such a compact form factor, says Apple. Musicians can produce music with powerful plug-ins and effects while photographers can adjust huge images in an instant. Creators can seamlessly work in multicam with multiple camera formats, including ProRes video, and gamers can play demanding titles in console quality. Gaming performance is up to 15 times faster than the fastest Intel-based Mac mini.3

In terms of connectivity, the M2 model features two Thunderbolt 4 ports and support for up to two displays. The M2 Pro model includes four Thunderbolt 4 ports and support for up to three displays. Additionally, the M2 Pro model can support one 8K display, a first for the Mac. Both models feature two USB-A ports, an HDMI port, a Gigabit Ethernet port with a 10GB option, and an upgraded headphone jack to support high-impedance headphones. For wireless connectivity, both new models also feature the latest standards with Wi-Fi 6E5for up to 2 times faster throughput than before, as well as Bluetooth 5.3.

Loaded with macOS Ventura, you get updates like Continuity Camera including Desk View, Center Stage, Studio Light, and more; Handoff in FaceTime; and tools like Stage Manager to automatically organize apps and windows.