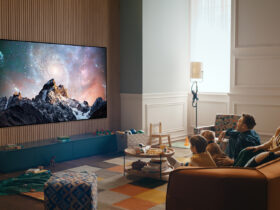 Bowers & Wilkins has updated its Pi7 and Pi5 in-ear noise cancelling headphones with S2 versions that boast improved sound, longer battery life, and enhanced designs. The headphones were first launched in April 2021 and this marks the second-generation of both.

Both second-generation models offer upgraded wireless connectivity thanks to a re-engineered antenna design with increased Bluetooth range up to 25 metres. This, says B&W, assures a stable, high-quality listening experience.

The Pi7 S2 offers Wireless Audio Transmission, which was also introduced in the first-generation buds. This feature allows you to connect to an external audio source like an in-flight entertainment system and wirelessly re-transmit audio from that source to the earbuds via the smart charging case.

Both are controllable via a simple one-button user interface, a capacitive button on each earbud that can perform multiple tasks. This is combined with voice assistant support via Siri or Google Assistant. The B&W app also offers various adjustments for fine-tuning other audio preferences.

As the flagship true wireless model in the line, the Pi7 S2 offers support for Qualcomm aptX Adaptive for high-resolution music transmission from compatible streaming services and devices, with 24-bit/48kHz wireless transmission between each earbud. They feature 9.2mm bespoke B&W drive units joined by a high-frequency balanced armature driver, with each of the four drive units actively driven by its own amplifier.

They also feature adaptive noise cancellation, which automatically monitors, analyzes, and adapts to its surroundings to produce an uninterrupted and clear listening experience. This is combined with six mics, three in each earbud, for sound quality when making and taking phone calls.

The Pi5 S2 model, meanwhile, includes TWS technology for earbud-to-earbud synchronization coupled to a single 9.2mm bespoke drive unit in each earbud. It supports CD quality playback with aptX wireless transmission from aptX-compatible devices. There’s user-selectable noise cancelling and an ambient pass-through mode when you need to hear some surroundings. For phone calls, it has twin built-in mics per earbud.