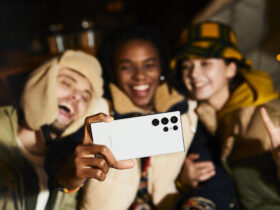 There’s always one or two innovations at CES that elicit the “oohs,” “ahhs,” driving attendees to flood their social media accounts with videos, live stories, and commentary about it. This year, while WiFi HiFi is attending the show for the second year in a row virtually, it was easy to figure out what technology got that designation this year: BMW’s iX Flow concept. What makes it so Insta- and TikTok-worthy? The car can change colour instantly. Yes, you can leave your home in a black vehicle and return home in the same one, except it’s glistening white.

How does it do that? The body of the car is laminated with an electrophoretic film, based on a technology developed by E Ink, with microcapsules that are as small as human hairs. Each one has differently charged white, black, or coloured particles that become visible once an electric field is applied. The result is technology known as an Electronic Paper Display (EPD).

The E Ink technology changes the colour of the car based on environmental conditions, functional requirements, or simply the driver’s preference. Since the ePaper is connected to a power supply, it’s assumed that the driver would be able to trigger the change via a button, remote, or other similar method.

The practical benefits are obvious. In extreme heat, black cars tend to get hot, so why not drive a white one in the summer? Different colours contribute to the wellness of the vehicle’s interior, in terms of how light and dark colours reflect sunlight. Adjusting the colour can also, in turn, adjust the amount of heating and cooling you need to use, which can then reduce the amount of energy a vehicle needs. Don’t need to crank the AC on a hot day in your black car that now becomes white? You’ll consume less fuel and electricity. There are also small things worth considering, like the dashboard not getting as hot. Conversely, when its frigid outside, you might prefer that darker colour, which can also retain heat better inside so you don’t have to crank the heat up to max.

You might, however, just want to adjust the colour based on your mood or event. Maybe you want a sleeker black car while attending a formal occasion or impressing a date, but basic white will do when visiting your parents.”Similar to fashion or the status ads on social media channels, the vehicle becomes an expression of different moods and circumstances in daily life,” says Stella Clarke, Head of Project for the BMW iX Flow featuring E Ink. (Can you say black for break-up, white for wedding?)

However, there’s one problematic issue that hasn’t been addressed: theft. Imagine describing your car to the authorities after it was stolen. “Make, model, and colour, please?” That last one might not be so easy. Another scenario: someone calls into the police station to report an assault or abduction. “Yes officer, the getaway car was black. Wait, then it was grey. Or maybe white?” Or perhaps a victim swears that the car in question was white but that white car can’t be spotted anywhere.

With that said, chances are that a high-end BMW won’t be the vehicle used in getaway crimes. And there would have to be a ton of these types of cars sold, should they ever come to market, in order to make that a real issue. If the concept itself becomes more popular and is adopted by other car makers as well, however, the repercussions for reporting car-involved crimes would need to be explored further.

Beyond that small hiccup, there’s no denying that the technology is ultra-cool. It’s a great way to get a new car without actually having to get a new car. And sometimes, all you need is that little change to get you excited for the day and in a better mood.