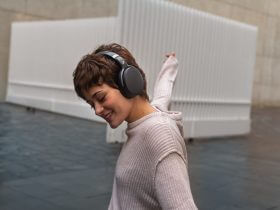 LG revealed its new TV line-up at CES 2022, but alongside the new OLEDs and LED TVs was one particularly interesting innovation: the StanbyME.

The LG StanbyME is a wireless private mobile wireless display that can be moved around anywhere in the house for watching TV, playing videos, conducting video calls, and more. It comes with a built-in battery and the movable stand with concealed wheels. The kids could move it into their bedroom for a bigger screen experience while doing virtual classes, for example, while parents could bring it back to the kitchen to follow a recipe video while making dinner. Because it has a touchscreen, it can also be used as an extra-large computer monitor in the home office, or even simply for surfing the web and accessing apps while relaxing on the couch. You can wirelessly stream content from an Android or iOS device; it also has HDMI and USB ports.

The battery affords up to three hours of viewing per charge, which is long enough for a feature-length film, to binge a few episodes of your favourite show, have a long gaming session, or conduct your Zoom meeting with colleagues or clients. While the screen is smaller than you might want in an LCD TV at just 27 inches, it’s larger than a standard laptop or even computer monitor. And it’s ideal for secondary viewing spaces like, as noted, the kitchen, kids’ bedroom, playroom, or even wheeling outside (in a shaded, protected area) to catch the game on the back deck in the summer, or in the garage.

Once mounted, the screen can tilt, swivel, and rotate, ideal if you’re watching something while moving around a room, or want to shift from watching the hockey game to checking out TikTok videos in portrait mode.

When you aren’t using it, simply wheel the StanbyME somewhere out of the way. Or position it somewhere to display artwork, photos, or even a calendar and clock.

How it’s used and for what will come down to pricing, but StanbyME seems like a great option for parents who are reluctant to allow kids to have a TV in their room. Wheel this in so kids can watch when they have permission, then wheel out once it’s bedtime. Or simply keep it on the main level to use as needed, from in the kitchen to outdoors (note: it isn’t rated for outdoor use but a covered patio without extreme temperatures for a few hours would likely be OK), home office, or as a second display in the living room when the kids want to play video games but you want to watch the news.

The possibilities are endless. There’s no word on when the LG StanbyME will be available, but based on its feature set and the useful stand on wheels, it could be a useful addition to the home that reinvents how and where we watch TV or work.