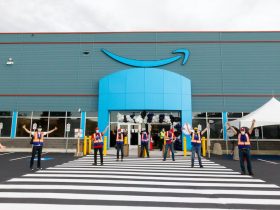 LG has finally re-joined CES after a two-year hiatus, and the company is going big in 2023 with major announcements in home entertainment, home appliances, and LG Gram laptops. When it comes to the former, there are exciting developments in OLED and LED TV as well as soundbars. Most notable is a new mounting system that makes combining an LG TV and soundbar seamless and simple.

While the press conference just wrapped up, WiFi HiFi had an early preview of the new home entertainment products in December. Here are some highlights.

LG will continue with its OLED evo lineup for 2023, with models featuring the 6th Gen a9 processor, which offers power performance improvements through the deep learning AI immersion of reality. The company says this will help bring you “right into the content.” Features include AI upscaling that helps reduce noise and improve resolution and sharpness and Dynamic Tone Mapping with up to 20,000 blocks of brightness and colour mapping.

New this year is Brightness Booster Max on the G3 series, which promises up to 70% more brightness thanks to light boosting algorithms.

The line will begin with the B3 OLED TV and move up to the C3 and G3 models in various sizes, followed by the top-line Z3 models. The G3 model features a new Zero Gap design that includes a flush wall mount and lightweight composite material that’s easy to transport, install, and move.

They will all feature the updated LG webOS UI, which includes upgrades like a more personalized home screen with recommendations, the ability to add up to 10 unique personal profiles with images and avatars for each, and Quick Cards that are designed to mimic the look and feel of a smartphone. Here, you can have one-touch access to things like home office apps, games, music, and dynamic sports scores for your favourite teams. There’s also an improved Quick Settings UI that offers an edit mode for highlighting the most used menu items.

A neat new feature is AI Picture Wizard, which will use a six-step process to help you effectively calibrate your own picture profile, like “vivid and warm” or “cool and natural” based on preferences and the content you’re watching. These can be saved to the settings menu so you can select the appropriate one again the next time you’re watching content of that type.

Another upgrade is a new AI concierge that improves the recommendations service to provide both content and tips, like adjusting to cinematic profile when queuing up a movie or reminding you to set a usual sleep timer. Along with hands-free voice recognition is a new Voice Agent that can conduct music searches based on music playing in the background or even your own humming or singing, effectively functioning as Shazam for LG TVs.

Additionally, there’s new multi-view side-by-side support with double inputs so you can use a different input for each side of the screen. Keep on top of the game on one side, for example, while playing video games on the other.

The new QNED TV line will include the QNED75, QNED80, and QNED85, each of which comes in multiple sizes. Boasting the a5 and a7 processor, depending on the model, they include features like ultra-slim design and WOW Orchestra, which uses both the speakers in the TV and the soundbar to improve immersive sound and reduce instances of things like lip sync issues and distortion.

WOW Orchestra will be combined with some other exciting innovations for LG’s complementary soundbars.

One of the most exciting announcements is LG’s efforts to offer complete synergy between TV and soundbar. Not only can the soundbar sync beautifully with a compatible LG TV for an immersive sound experience, you can also use the TV UI and Magic Remote to access soundbar functions.

The soundbars are also designed to perfectly match the TVs not only in look, but through mounting hardware. They will come with a new bracket that is designed to attach directly to compatible LG TVs for easy installation with no drilling required. Simply slide the soundbar into the slot at the bottom of the TV where a stand would typically go and it’s set for a seamless look. Such a set-up makes it not only a logical fit (literally and figuratively) to use an LG soundbar with an LG TV, but could also help increase attachment rates for new TV buyers.

The updated Sound Bar Éclair SE6 is now an all-in-one design with fabric material, a smart upmixer, spatial sound, WOW Synergy, and the exclusive bracket. Another new model is the SC9 Soundbar, which is designed to match with the OLED C series TVs and comes with a sub.

While it falls out of the realm of home entertainment, one product worth mentioning that will be a must-see at the show is the LG Puricare Aero Furniture. First shown at IFA, those who didn’t get an in-person look at that event will want to see these live. The concept is an air purifier that also functions as an end or side table, with a flat, round top for placing items like books, vases, photo frames, and more. The top surface also features a built-in wireless charger so you can also plop your phone, tablet, wireless earbuds, or other QI-enabled device down and have it recharge.

The purifier itself features UVNano technology, multi-fan modes, easy-reach control under the tabletop, built-in lighting, and LG ThinQ for controlling everything from lighting to airflow from your mobile device. With special edition designs coming, it’s a useful small home appliance with a design-conscious and functional twist.

There are exciting things to come from LG, not only in TV and audio technology, but also from a user interface and aesthetic standpoint. The focus here is on personalization and ease of installation as well as getting great sound and picture, and having products that look good in your space.

The WOW Orchestra and WOW Synergy features accomplish this in spades while also giving customers an incentive to get a TV and soundbar in one, maximizing the experience with a soundbar,” says LG’s David Park, and providing “synergy and design matching.”

Pricing and availability in Canada will be released at a later date.