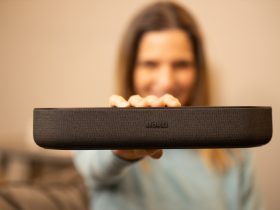 There has been a lot of debate over fitness trackers for kids. Some believe that they promote negative body issues, making kids feel self-conscious if they don’t meet set activity levels, or believe their parents are pushing them to lose weight, be more active, or live up to certain standards. But is this really the case?

As with anything, it’s all in how you present it as well as the mentality of the child in question. My 8-year-old son has been wearing the Fitbit Ace 2 fitness tracker for a year now, and I can firmly say that there have been no negative outcomes.

He began asking for one when he saw how religiously I use mine. When we were at amusement parks or other places with friends and all of the moms were competing for steps, the kids were anxious to get on board, too.

When he started wearing it, he began to, of course, overtake me in steps every day. Any active child going outdoors for recess three times a day and doing extra-curriculars will easily meet his or her 10,000-step goal and desired number of active minutes. But it’s nothing they should be scolded for if they don’t. (This, of course, doesn’t apply to today during the COVID-19 pandemic when school is out.)

During the early months in 2019, my son was easily clocking 13,000 steps daily, though he might have a lazy weekend at home where he only gets 4,000 or 5,000 steps. And that was OK. He enjoys checking in, competing with mom, and wearing the handy device on his wrist that also tells time, that he can use as a timer, and flip through screens to stay on top of progress. I had initially thought it would be a distraction while he was in school or summer camp last year. But it wasn’t.

And there are a number of benefits to consider with such a device. It encourages healthy habits, not just for kids who might be struggling with their weight or spending too much time playing video games (especially now while stuck at home), but for any child. When I used to suggest to my son that we walk home from school last summer, he’d be reluctant. But with a tracker, he was happy when I showed up on foot. When he shrugged his shoulders halfway there, exclaiming that he was tired, he looked at his tracker and excitedly kept going because he wanted to make his steps.

Some trackers reward and motivate kids with badges. With the Ace 2, my son might see a cool rocket ship scoot across the screen when he hits 10,000 steps. I can also track data through the Family Account in the Fitbit app. The app purposely does not track calories for kids, to avoid the notion that kids need to watch what they eat, lose weight, or feel guilty about having ice cream or cake for dessert. With kids’ trackers, it’s all about fun, even if parents might have ulterior motives, like checking to make sure their kids are getting enough activity to maintain their health and wellness and trying to make subtle changes to family lifestyles overall if they aren’t.

Speaking of wellness, one of my favourite features of the Ace 2 and the Fitbit app is my ability to track my son’s sleep. Like with my own tracker, I can see how many hours he sleeps each night, when he actually falls asleep versus when he went up to bed, and how rested or restless his sleep was. Just as it has become second nature for me to check on my own sleep every morning, I now do the same with his, flipping to the Kid View in the app so I can see if he got a good night’s sleep or not. I can also check if he secretly stayed up reading after it was lights out, and have been able to get insight as to how stress from the COVID-19 pandemic has impacted his sleep patterns.

As noted, there’s also a level of motivation. A child who was dragging his feet at having to go to soccer or baseball one day, or being told by mom and dad to go get some active time in the backyard, might be more excited to realize that he’ll add tons of steps and active minutes to his daily count. Again, there’s no judgement nor expectation. That’s the key: if the parents approach it as a fun, motivational device, so will the kids. They might also be more inclined to go play in the backyard or jump on the trampoline for a bit before dinner instead of playing video games or watching videos on their tablet. And there’s nothing wrong with that as long as it’s viewed as motivation not obligation.

Many trackers have additional fun features for kids. With the Garmin vivofit jr., for example, kids earn virtual coins that can be redeemed for rewards. That could be extra screen time, ice cream, a trip to the zoo – whatever you fancy. That device also serves a secondary function of allowing kids to keep track of their chores, ticking them off as each one is complete to earn virtual coins. The chores could be as simple as finishing homework, feeding the dog, or taking out the garbage, to more involved chores for older kids, like washing the dishes or cleaning their rooms. With the LeapFrog LeapBand, points earned are gamified as kids can use them to enhance the experience with on-screen pets, buying virtual items for them as a reward for doing fun activities like dancing or crawling like a turtle.

Most of the “tracking” in a kid’s fitness tracker is done by the parents, and kids don’t need to see all of the nitty-gritty details, like the average activity levels of kids their age, gender, and weight (and how they compare). But the parents can gain useful insights from this that could cause them to change family habits. Maybe seeing that your child’s activity levels are way below average might spark parents to add a family activity to the weekly schedule, like having everyone go out to walk the dog together or doing Sunday walks to the park. Kids don’t need to know the motivation behind it. But it could benefit them in the long run.

Then there’s also the aspect of fun family competition. If others in the family have trackers, you can set up challenges to see who can get the most steps while you’re on a family vacation, for example, at the amusement park, or dancing it up at a party. Again, it’s all in fun. And no one is left to feel bad about themselves in the end.

And let’s not forget that setting personal goals is a great lesson for kids to learn at a young age. After easily surpassing 10,000 steps daily, my son asked me to change his goal to 13,000. I told him that was a little too much, and I didn’t want him to get disappointed if he didn’t meet that every day. He said he didn’t care if he met it every day, but just wanted a challenge. How can I argue with that?

Kids are fragile beings, yes. But they are also stronger than you think. Getting your child a fitness tracker does not automatically imply that you are telling them they need to be more active, lose weight, or aren’t healthy. Perhaps the best route to go is to let the child lead the discussion. If the child expresses interest in having one, find out why. Is it to compete with friends? Compete with mom and/or dad? Get a better understanding of how many steps they take every day and how active they are? Set personal goals to feel a sense of accomplishment when they meet them? As long as the child understands that it’s a fun device that can encourage them to adopt healthier habits, not a monitoring device to make sure they do, that’s where the difference lies.

Especially nowadays as kids are stuck at home, fitness trackers can help them try to keep up the same activity levels they had when in school. They are allow for a fun way to communicate with friends in challenges to see who can get the most steps per day, for example, or do workouts together using Messenger for Kids to video chat while doing it.

So to the naysayers, ask yourself why you feel a fitness tracker is not appropriate for kids. It might just have more to do with the way you think than the way they do.