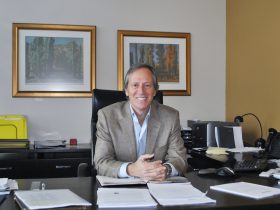 This January marks the first time in 23 consecutive years that I will not be in Las Vegas for the annual Consumer Electronics Show.  In over two decades, I have stayed at pretty much every hotel on the strip and have spent at least 600 hours that I will never get back, standing in line for either a Vegas taxi, a conference bus or breakfast buffet.  If you have been to CES you know what I am talking about.  I have been amazed at the growth of Las Vegas and how hotels can go up in a year from the time I was last in town, when it takes the same amount of time to restore a sidewalk in my own hometown. Even more amazing is the growth in attendees that make the annual trek from around the world to see the Oscars of Tech.

CES and Las Vegas have become a badge of honour to loathe.  It’s too crowded, too expensive, too big, too diluted, too loud, too exhausting, too overwhelming.  Naysayers will gripe that they can stay at Caesars in June for $89 bucks a night but during CES, the rate is jacked to $500 a night.  Folklore has it that the restaurants have special menus for CES that increase prices on all items and then add an 18% automatic gratuity. Who knows if this is true and even if it is, the high prices certainty don’t deter the crowds from lining up at Joe’s Stone Crab, Wolfgang Puck or Gordon Ramsay’s Hell’s Kitchen and so what if it’s expensive? Isn’t supply vs. demand what determines pricing in a free market economy?

The complaining starts at the airport.  If you are lucky your flight is on time.  Remember it’s January so fingers crossed your flight from Toronto, Calgary or Montreal isn’t cancelled due to weather.  And of course, Air Canada has over-sold the flight so good lucked with that carry-on bag and fingers crossed your Aeroplan status is enough to keep you from being bumped.  The old joke said; if the planes to Vegas for CES go down, the Canadian CE industry would be wiped out!

CES is the only conference you can attend where you spend ten hours on the show floor for four days straight and when you are asked “what did you see?” You draw a blank.  You see so much that you see nothing.  The best way to remember a CES is with the big moments – that’s the year we saw a flat panel TV for the first time, or that was the year that Bluetooth was unveiled.  You never forget the first time seeing a drone with a camera flying above the crowds or an 8K television the size of a small building.  CES is about the WOW and it never disappoints.

CES is also about dinners and shows and staying out until 3:00am.  The first time I ever had a vodka Red Bull was during CES.  I had so much fun that night that when I left the club at what I thought was 1:00 am it was actually 5:00 am.  I still made my 8:00 am meeting.  One colleague years ago having a martini for the first time, looked at me and asked; “what is this?”  It is a martini.  “What’s in it?”  Gin.  “hmm, they are pretty good!”  Indeed, CES is not only a first for the tech on display it’s also where you let your hair down and do what has been sorely missing in 2020 – you network and have fun with colleagues, who often have become friends.

For years, we had the honor of hosting an event called Canada Night.  We had some good ones all over town.  The old timers will remember the ones at the Flamingo Hotel and how our party migrated to Bugsy’s Bar at the bottom of the escalator. To this day Bugsy’s remains the meeting spot for Canadians.  The younger members of the industry probably enjoyed Canada Night at the Bank Nightclub, at the Bellagio.  Those were my favourite.  That was also when we moved to an open bar which became everyone’s favourite! One year we had the Canadian band The Cowboy Junkies play Canada Night. That was when magazines had budgets!

Once we had smart phones and you could text, if you were a Canadian at CES you were guaranteed to run into someone to have a beer.  “Hey where are you?”  We’re at the Crystal Bar at the Cosmopolitan, or the Hardrock lobby or at Cleopatra’s Barge at Caesars.  We are on our way.  The rookie CES move is to think that just because the Bellagio is next to Caesars that it will be a five-minute walk between properties.  Ha!  I still remember walking to the MGM from the Venetian for a meeting thinking that it would be just a few blocks. It looks so close!!

Then there is the noise.  Every booth in the Central Hall competing with each other for who can be the loudest.  When it finally becomes unbearable, you head out for some fresh air only to be bombarded by more noise and a thousand smokers, hogging every bench and chair.  So much for the fresh air!

In 23 years at CES, coming home sick was a given.  Now that we have experienced “2020,” I think back at all those handshakes, public bathrooms, night clubs tighter than a can of sardines, and hours upon hours indoors with 170,000 people from all over the world and I am honestly surprised that Covid didn’t happen sooner. Unless you have been to CES, you can’t fathom the crowds.

What else I can’t fathom is not being there this January.  For all the crowds, noise, lineups, expense and headaches, I miss it all.  If I could wave a magic wand and everything be back to normal, I’d be lining up to give hugs and shake hands and excited to see what’s new in the booth.  I hate Las Vegas but boy what I’d give to be there for CES right now.