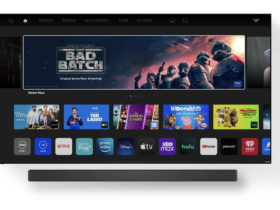 Buy A VIZIO TV and get Discounts to Streaming Services

The SlimBlade Pro Trackball, model K72080WW, is plug and play and works with both PC and Mac. Choose Bluetooth, 2.4GHz, or wired connection options and it will run for up to four months thanks to the rechargeable battery, using finger operation that affords accuracy, comfort, and control.

You’ll enjoy precision movement with twist scrolling thanks to the large 55mm trackball that lets you scroll up and down web pages and documents via a simple twist. Dual sensors accurately track the large 55mm ball, providing accurate and responsive cursor tracking and scrolling, and more precise cursor control.

Compared to a traditional mouse, Kensington says the SlimBlade Pro requires less desktop space to operate, and requires less hand and wrist movement, making it more comfortable during extended use. The low-profile shape, meanwhile, offers comfort for both right- and left-handed users.

Using Free downloadable KensingtonWorks software, you can further customize SlimBlade Pro by assigning a variety of program functions to each of four individual buttons and four combo buttons.

“Kensington has been a leader in the evolution and innovation of trackballs for businesses and consumers since the launch of Kensington Turbo Mouse 35 years ago, and the new SlimBlade Pro is truly our most advanced trackball yet,” says Lisa Schuiteboer-Shuler, Global Marketing Manager, Product Marketing at Kensington. “In addition to being a finger-operated trackball, which ergonomists prefer over thumb-based trackballs for precision and comfort, SlimBlade Pro provides unparalleled flexibility for users. The SlimBlade Pro provides an identical user experience for both left- and right-handed users, can connect wirelessly or via a cable, and its customizable buttons allow users to easily access their most-used functions. It’s the ultimate trackball.”

The Kensington SlimBlade Pro Trackball (K72080WW) is available now in North America through the Kensington Store and its partner sites.