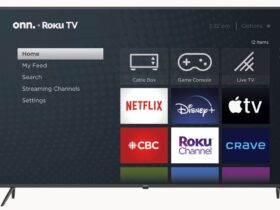  onn. Roku TVs are Now Available at Walmart in Canada. But Should You Get One?

There’s an abundance of choice when it comes to streaming TV options, and the list has been growing in Canada. Along with the staple services like Netflix, Crave, Amazon Prime Video, Apple TV+, Disney+, and Paramount+, there are also services like CBC Gem, Acorn, BritBox, Hayu, and even Roku has its own original content and free streaming options as do services like Plex. There’s new one in the mix now: Pluto TV launched in early December through a partnership with Corus Entertainment Inc.

The ad-supported TV service, which is a Paramount company, offers more than 20,000 hours of free programming in Canada, offered over 110 thematic and single-series channels. The content comes from studios like Paramount as well as other global media partners, and includes genres like drama, comedy, lifestyle, and kids along with movies, news, and more.

“I am thrilled to officially introduce Pluto TV to Canadian audiences, bringing them a fantastic lineup that combines the best of Corus’ Canadian content, Paramount’s deep library and more than 100 third-party partners,” says Olivier Jollet, Executive Vice President & International General Manager for Pluto TV. “The union of Pluto TV and Corus delivers the best of both worlds, debuting a free streaming destination for fans, and creating opportunities for advertisers, offering a premium inventory in a brand safe TV environment.

“This year,” he continues, “has marked tremendous growth for Pluto TV, having expanded to the Nordics in May and now to Canada. As we are now in more than 30 countries and territories, we are one step closer to our mission to entertain the planet.”

“Our strategy has always been rooted in placing more content in more places,” he adds, “and Pluto TV further advances this goal.”

Simply visit the Pluto TV website or app and browse the catalogue to see what’s offered on each channel. Some are dedicated to specific shows or franchises, and others even to popular stars. There are channels like Busted at the Border that features Border Security, the CSI channel for everything CSI, and even a Family Ties channel that features both that ‘80s sitcom as well as Michael J. Fox’s ‘90s show Spin City.

If courtroom shows are your thing, there’s Pluto TV Courtroom with shows like Jag and Judging Amy and drama fans can check out the aptly named Drama Channel with series like Departure and Private Eyes, both of which hail from Corus in Canada. Other single-series channels include Beverly Hills 90210, Baywatch, Dynasty, and Shameless UK. The Pluto TV Comedy Channel, meanwhile, includes shows like South Park, Frasier, Cheers, Family Ties, King of Queens and more. Reality TV content includes titles like The Drew Barrymore Show, The Judge Judy Channel, Gordon Ramsay’s Hell’s Kitchen, and Fear Factor, and kids can tune in to shows on Nick Jr. Pluto TV like Blues Clues, Wallykazam!, Preschool Pals, Preschool Play, iCarly, and Victorious, as well as channels centred on titles including Totally Turtles dedicated to Teenage Mutant Ninja Turtles, as well as Dora TV, Ryan & Friends, and more.

Pluto TV also has a selection of movies, organized in channels by genres like romance, drama, comedy, and action. Check out movies like Ferris Bueller’s Day Off, How to Lose a Guy in 10 Days, Wayne’s World, Grease, Terms of Endearment and Gladiator.

For the holiday season, there’s a special Christmas 365 channel with holiday movies playing 24/7.

Meanwhile, sports fans can catch games and events on BelN SPORTS XTRA, World Poker Tour, and MAV TV Select, while gamers can access content that celebrates the most-beloved videogames, such as Gameplay: Call of Duty, Gameplay: Fortnite and Gameplay: Roblox.

For those into Home & DIY, Pluto TV offers curated channels like Home Outside, Reno & Flip, Fixers & Flippers, Reno Duo, and In the Market, which feature lifestyle content from Corus including Bryan Inc., Property Brothers, Love It or List It, Sarah Off the Grid, Home to Win and more.

Pluto does not require registration: simply visit www.pluto.tv or download the Pluto app, which is available for Apple TV, Amazon Fire TV, Roku, Android TV, Chromecast, Samsung and LG devices, and via mobile apps on the App Store and Google Play, and start watching. Corus is serving as the ad representative for Pluto TV.