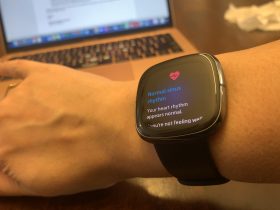 You Can Now Take an ECG Measurement With the Fitbit Sense

The biggest anxiety or maybe a better word, the biggest headache, when reviewing audio components is the dismantling of the system that you already have in place in order to set up the new one to be reviewed.  Boxing and unboxing, speaker set up, multiple cables and then of course the tweaking to get the new unfamiliar gear just so.  It takes time and can be exhausting.

That may be why the JBL Bar 5.1 had been sitting in my garage for a few weeks being ignored until I was reminded that it “ain’t gonna set up itself!”  Such procrastination on my part now seems totally irrational if not embarrassing for the JBL Bar 5.1 may be the easiest system I have ever set up.  The biggest “challenge” was bending over to find the optical cable buried in a sea of wires in my home entertainment credenza.  In other words, there was no challenge at all.

The JBL Bar 5.1 is a sound bar and subwoofer combo that ships in a single albeit quirky shaped box.  The instructions are to lay the box – that looks like how a child would draw a rectangular house with a big chimney – on its side and then remove the contents.  So far so good.

The slim line sound bar contains five 50-watt speakers and wirelessly synchs to a 10” 300 watt powered subwoofer.  Earlier versions of the Bar 5.1 had removable end-speakers attached to the soundbar that could be used as rear speakers.  The latest version of the Bar 5.1 abandons the removable speakers that were a bit gimmicky and is replaced with what JBL calls their MultiBeam technology to deliver a multi-channel experience from a single source speaker.  MultiBeam can decode Dolby Atmos processing for a realistic moving sound experience without rear speakers.

To set up the system I plugged in the soundbar and attached an optical cable sourced to my 75” Samsung Frame TV.  I then plugged in the sub that I placed on the floor to the right of the TV (the JBL set-up diagram has the sub positioned to the left of the TV but hey, sometimes things need to be flexible to accommodate furniture and electric plugs).  Pairing the sub to the bar was instantaneous with one button to push on the sub. No secondary transmitters to marry, or multiple buttons, the pairing just effortlessly happens.

Often when one is considering a sound bar the question becomes where do you place it? Some bars are so tall that they cannot sit in front of the TV for it blocks it so you either need a credenza that’s purpose-built for a sub and conceals the speaker behind cabinet drawers or you are going to have to mount both the TV and soundbar on the wall.  Not surprisingly, seeing that Samsung owns JBL, the Bar 5.1 measuring 40.1” wide by 2.3” high sat comfortably in front of the Samsung Frame blocking none of the picture and the colouring of both the Frame TV and the JBL soundbar were a pretty close match.

The reason of course that we add external speakers to our TVs, is due to TVs becoming so slim and so big, that most internal TV speakers are completely under-qualified for the task of providing immersive sound.  Hence, we look for an alternative with a mandate that for me includes loudness with clarity with a proper balance of highs and lows.

To test the JBL Bar 5.1 we watched the action-packed movie Point Blank that’s full of crazy stunts and a heart-pounding soundtrack.  Out of the box with no tweaking, I found the bass to be overpowering and unnatural but easily adjusted with the bass control on the remote (there are no volume or cross-over controls on the sub itself). While I found no audio / video synch issues, I did play with the function which again is super easy by pressing the TV button on the remote for three seconds and then the + or – buttons to align the audio with the video.  JBL defaults the soundbar to what they call Smart Mode that offers rich sound effects by bumping up the EQ settings.  Some may find this unnatural especially for news or sports and can be easily disabled to standard mode by holding the mute button on the remote for three seconds.  The only annoying feature is that when you turn the soundbar off it will automatically reset back to Smart Mode. I found Sunday NFL football games sounded better in standard mode while movies were better in the default Smart mode.

You will notice that I have used the word easy several times in this review and if I had to only use a single word to describe the JBL bar 5.1 it would be just that … easy.  Even software updates are done automatically so long as you have connected the speaker to your home network.

While the Bar 5.1 is an ideal space saving home theater option, it also operates as a music streaming system via built-in Airplay, Chromecast or 4.2 Bluetooth, a handy and there it goes again, easy feature for those living in condos or house their entertainment in small rooms.

The JBL Bar 5.1 – JBL2GBAR51IMBLKAM has an MSRP of $849.98.  Included in the box is the sub and soundbar, a remote, an HDMI cable and a mounting kit.  The Bar 5.1 can also be controlled by the available JBL app downloadable for both Android and Apple.

If you are looking for a streamlined soundbar that is easy to use, small enough to place in multiple positions that has effortless wireless pairing to the subwoofer with both 4K HDMI and optical connectivity along with streaming for both video and music, the Bar 5.1 is a well-priced and feature-rich option.

JBL and all Harman Kardon products are distributed exclusively through Erikson