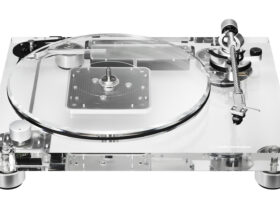 Over the last two decades, more and more people have been moving to front projection systems and I have been asked one too many times to provide advice on which projection screen they should buy. The magic is in the pairing. Naturally, you wouldn’t pair your $2,000 DSLR camera body with a budget $500 lens, and the same must be said about matching a projector without a suitable projection screen.

A middle-of-the-road projector displaying images on a very well-made screen can easily beat a high-end projector projected directly onto a wall. It really is a complex marriage between projector, screen, ambient lighting, room colour, and viewing distance.

When I say “you absolutely need a very good screen,” it’s not out of videophile snobbery. I started my projector journey with a bare wall (it was slightly off white), then followed up with a pure white screen (still painted). I then graduated to a matter white 1.0 Gain screen from a well-known (but more budget friendly) manufacturer, to a Stewart StudioTek 100, StudioTek 130 G3, and now to the Stewart StudioTek 130 G4. I have also tested and calibrated projectors on various screen materials from the so-called home theatre paint, and more than a couple dozen screen brands and materials. So I have experienced the lowest of the low on the screen spectrum all the way up to the industry’s de-facto standard, the Stewart StudioTek 100.

With every migration up the screen food chain, I was able to visually detect the differences between screen performance. With some really well-known budget screens, the colour bias, and even specifications, can vary greatly. One main example is that a screen that is specified as a 1.4 gain grey screen was measured closer to 0.8 gain with extreme blue bias, making no amount of calibration able to compensate for the screen deficiencies. Other differences, outside of colour accuracy, fall to ease of use and set up. Some screens are such a pain to install, requiring at least two people spending more than an hour to assemble them.

With Stewart, starting from the StudioTek 100, to the 130 G3 and now 130 G4, the screen replacement process took me (just one person) no more than 15 minutes. That’s including taking the frame down and back up again (that part still requires two people, of course). This is the fastest time I’ve ever clocked in installing a replacement screen in my entire 20-plus-years career. Every single button has been manufactured perfectly to allow a new screen to install on my old frame (I only needed to provide Stewart with my custom sized frame serial number).

Once I was done with the install, I immediately tested the screen with a full-white image to check the screen uniformity. Other than some vignetting from the JVC NX7 projector, I did not notice any uniformity flaws. And trust me, I tried very hard to find faults with this screen. There was no sparkle or texturing that I could easily detect when playing the uber-bright 4,000-nit mastered Sony’s UHD Blu-ray Mask of Zorro (highly recommended for both remastered picture and Atmos quality).

Using Spears and Munsil UHD Benchmark discs, I also played the single-pixel on/off test pattern and each of the pixels in the pattern was sharp as a tack without any compromise whatsoever. Testing the screen with actual movies showed that the sharpness was better even when compared to my original G3 version of the screen. It never crossed my mind that improvements this vast can happen beyond the already near perfect G3.

Watching high HDR and colourful movies such as Bloodshot and Bad Boys for Life was almost like watching these movies for the first time. Exaggeration of grains is gone, horizontal motion artifacts are completely non-existent, vertical motion artifacts are nearly imperceptible (read: near perfect). Sharpness, too, has improved rather dramatically. Watching my 4K movies on the 96” 21:9 screen from nine feet away (eye to screen) feels truly 4K, and images have a natural 3D rendering. Oh, and brightness too is vastly improved. Using the JVC NX7 projector from 15 ft away (lens to screen) I easily get nearly 34ftL (foot Lambert) on this screen, much higher than Dolby Cinemas brightness 31ftL reference requirement.

While the “old” StudioTek 130 G3 was the best 1.3 gain screen on the market (it is now discontinued), it still has a tiny bit of hotspotting and patterning if you know where to look (and it has to be at the right moment, correct angle, and just the right scene), the new StudioTek 130 G4 doesn’t show those artifacts when viewing the exact same scenes from any angle in my 10’x16’ home theatre. It is extremely close to the de-facto standard StudioTek 100 used by various studios worldwide.

This makes the Stewart StudioTek 130 G4 the new reference standard for positive-gain screens on the market today, and it likely will be for quite some time.