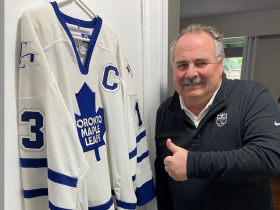 The Kindle Scribe is Amazon’s latest e-reader, promising to offer a reading and writing experiences that feels like real paper. Equipped with a 10.2-inch 300 ppi display with an adjustable front light, readers can add handwritten sticky notes to pages as they read. Whether it’s notes in a novel or journal entries, there are plenty of options to use the feature. It will come in Tungsten and 16, 32, or 64GB storage capacities along with a battery-free Basic Pen or Premium Pen with eraser and customizable shortcut buttons. Pricing in Canada will start at $429.

Amazon is also expanding its growing line of TVs with the new Fire TV Omni QLED series of smart TVs that incorporate hands-free Alexa voice control and new ambient features that turn it into an always-on smart device when you’re not actively watching TV. Boasting 4K Quantum Dot technology with full-array local dimming of up to 96 zones, the TVs offer support for Dolby Vision IQ and HDR10+ Adaptive. Use Alexa to find apps, discover shows, manage playback, and control the ambient experience. The TV is available in 65” for $1070 and 75” for $1,500.

Also in the home entertainment space is the new Fire Cube TV, the third-generation of the popular streaming media player that now includes an octa-core 2.0GHz processor that Amazon says makes it 20% more powerful than the previous generation model. It can be controlled hands-free via Alexa and supports 4K Ultra HD, Dolby Vision, HDR, and immersive Dolby Atmos audio, New features include an HDMI input port, Wi-Fi 6E support, and Super Resolution Upscaling. It’s available for pre-order for $190 and the Alexa Voice Remote Pro, also on pre-order, is $45. Just make sure you own a Fire TV device that’s compatible with the Voice Remote Pro.

The Echo Studio, meanwhile, is being enhanced through over-the-air updates to allow for new spatial audio processing technology and frequency range extension. This custom-built spatial audio processing technology is designed to enhance stereo sound, making music and movie soundtracks feel closer to the listener with greater width, clarity, and presence, says Amazon. Echo Studio is available for $260 and with pre-orders available for new colours: Glacier White and Charcoal. The new version will begin shipping next month.

On the home networking side, Amazon is releasing a new range of eero products, including the eero PoE 6 and eero PoE Gateway: The eero PoE 6 and eero PoE Gateway are Power-over-Ethernet (PoE) devices that can be easily installed and use wired infrastructure to deliver fast, reliable Wi-Fi throughout homes and businesses. eero PoE 6 is a dual-band Wi-Fi 6 PoE access point that provides up to 2,000 square feet of coverage and supports more than 100 connected devices. It supports 160 MHz channels and wireless speeds up to 1.5 gigabits per second (Gbps). It can go almost anywhere ethernet cable can be pulled, making it easy to flush mount to ceilings and walls.

The eero PoE Gateway is a high-performance wired gateway that supports Internet Service speeds up to 10 Gbps with two 10 gigabits (GbE) ports and eight PoE-enabled 2.5 GbE ports. The eero PoE 6 powers a range of PoE devices like access points and security cameras with an available 100 W of PoE power output when used with the 140 W eero power adapter.

With eero Built-in, Amazon has added eero mesh Wi-Fi technology, including the company’s patented TrueMesh, directly into the latest generation of Echo Dot and Echo Dot with Clock, making them the first Amazon Echo devices to serve as mesh Wi-Fi extenders. eero Built-in enabled Echo devices can add up to 1,000 square feet of coverage to your existing eero network and support speeds up to 100 Mbps so you can easily stream in 4K or take an HD video call at home with fewer dead zones and drop-offs.

Finally, there’s eero for Pro Installers, which gives professional installers access to a new set of software tools designed to help quickly set up a customer’s Wi-Fi network and manage issues remotely through the eero app. This five-year license provides access to premium eero Insight features in the eero app, including network health monitoring and remote network management. It also includes the ability to easily transfer networks from installers to customers. It is included with eero PoE 6 or eero PoE Gateway when purchased through authorized professional installers.