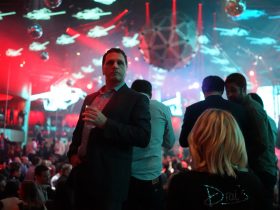 He’d only make a passing reference to his challenges, and I’d have to dig. Roger doesn’t like to complain. And when I would sense the tip of a horrifying iceberg, he would wave me through like a traffic cop at passing rubberneckers. I soon realized there had been some struggle on Roger’s path to success.

Roger Delarosbil is President and CEO of Signature Audio Video in Ottawa. Having shared a hotel room with him before, I knew he was tidy, and I’ve never seen the man intoxicated. But in this interview, I learned much more about what makes Roger extraordinary.

Roger was born in 1962 in a little town in Northern Ontario called Haileybury, and his family moved to Sudbury when he was 7. There, his father got a job as a foreman and was seriously injured in a mining accident. There were frequent accidents and scant compensation in those days. His mother had to find work and his dad had to stay home. “It was not good. We were extremely poor. So I decided that I was going to change the pattern. I wasn’t going to live like that or get myself into a position like theirs. I didn’t want my kids to grow up the way I did.”

Barely in his mid-teens, Roger got a job dressing mannequins in the windows of the Fairweather store in Sudbury. Fairweather’s parent Dylex owned other stores as well, and at just 18 years old, Roger moved into commission sales at Big Steel, the only young men’s’ fashion store in the city. He was quickly promoted to sales manager. “We climbed into the top five in Canada for sales and profitability.”

Expanding his talents into sales, a co-worker’s mom turned Roger on to the earnings potential of aesthetics products, so he went on the road doing live demos for beauty shops. “I would wrap some lady in clay or algae, and would explain all the processes and why they should be selling this stuff. I’d write an order and that was my evening. I was an okay-looking kid, so I did very well.”

Moving forward, Rogers relocated to Ottawa, but made the 10-hour round trip to Sudbury and back every weekend because his mother had developed cancer. “My mom died when I was 19. I’ve lost all my family to cancer. My father died six years ago. Alcide, my brother who worked at Signature AV, died a year later. And my sister a year after him.”

In the early ‘80s, Roger met a family who would become very dear to him. “Gilles Langlois interviewed me for a job at Langlois Car Radio. They were under-performing, doing about $300,000, mostly with Ford dealerships. I got the job and six years later when I left them, they were doing over $3 million a year. They are still in business today.” Roger had sensed an opportunity and expanded the mix to performance car parts. “I’d gone to some dealerships and said, ‘give me a base car and we’ll put great suspension, wheels, a performance body kit, an upgraded aftermarket stereo, give it a special name, and you’ll sell it and boost your profit dollars.’ One dealership gave me a shot. We delivered the car and it lasted just three hours in their showroom. We ended up getting an open PO to deliver as many of these as we could build.”

Roger joined national distributor Trends Electronics in 1991 when the company was just starting. They gave him a territory, and a guaranteed salary, but they had few dealers. Just a list of targets. “By the end of my first year, I had over 60 dealers and they had given me an award for highest growth.” He stayed with Trends for six years, during which time the late Mitch Irving became a mentor for Roger. But again, it was time to move forward. “My wife and I had decided to start a family. The owners of one of my small accounts in Ottawa, Stereo Plus Kanata, pitched me on buying 50 per cent of their store, and I felt ready.” Roger bought his partner Susan out 10 years later. “And here we are today in a new building on my own property, and things are good.”

West Ottawa was booming with tech. “We grew from a staff of three, and by the time we moved into our new building, we had 25. The people who have been with me since the beginning are now my family. We take care of each other.”

Even on his days off, Roger is up early. “I can’t wait to get at the day. One of our favourite things to do together is to pack the ATVs into the trailer and Francine and I go deep woods riding for a whole afternoon, and go swimming together. Usually we follow a trail with a GPS and find a little lake and have a picnic.”

Roger took up riding motorcycles, and in five years, he has owned five bikes. He has happily settled on a Suzuki GSXR 1000. “It’s a bit like my Ducati Super Sport except it is Japanese and has no issues. On a bike, I’m in high concentration mode and it takes my mind off work. And when the time is right, it’s on my bucket list to do a trip with my boys.

“The other thing I love to do on a week night is meet friends at the track and race each other for a couple of hours. I always have a Cobra or Mustang in the garage. I just purchased a 2003 10th anniversary SVT Cobra that has 7,400 miles on it, although it still looks brand new.”

Roger has a lot of miles on his own personal odometer, but you’d never guess.