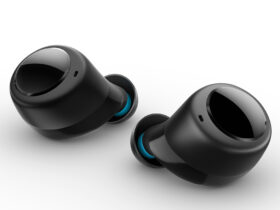 After working with a variety of manufacturer partners that developed their own hardware centered around the Android OS, Google decided to launch its own branded phone: the Pixel. Now in its sixth iteration, the Pixel 6a, introduced at Google I/O 2022 earlier this year, was joined by several other product announcements, including the latest version of Google’s true wireless earbuds, the Pixel Buds Pro. I had a chance to try out both, and here, we’ll take a look at the earbuds.

What are the Google Pixel Buds Pro?

An obvious answer to Apple’s AirPods Pro, the Google Pixel Buds Pro are designed to be used with Google Pixel phones as well as other Android devices and even iPhones. Indeed, I also paired them with my iPhone XR to listen to streaming tunes from Apple Music, and other sources.

Selling for $259, $70 less than Apple’s AirPods Pro, the improvements over the previous generation Pixel Buds include the addition of active noise cancellation (ANC), a custom audio chip, and Bluetooth multipoint support. A unique feature is Silent Seal which automatically adapts to each individual wearer’s ears to ensure effective noise cancellation. The Silent Seal also monitors pressure in the ear canal, making the Buds comfortable to wear for long periods of time.

Running for up to seven hours per charge, more with the included charging case, there are plans to add more features in the future, like spatial audio and Android Find My Device. While you can use them with any Bluetooth-enabled mobile device, you’ll get the most out of the Pixel Buds Pro with an Android phone where you can download the companion app for additional customization options and settings.

Immediately out of the box, it’s clear the Google Pixel Buds are stunning in design. The equally attractive case houses them beautifully for popping into a pocket, backpack, or bag.

These were one of the simplest earbuds to pair with my phone I have ever used. I popped open the case after charging them, turned on Bluetooth, pressed and held the pairing button on the back of the charging case, and up they came on my Bluetooth list. Tap and voila! They were paired. I have often run into pairing issues with other headphones where I’ll have to try multiple times, turning Bluetooth on and off for them to finally sync. So, this initial experience was refreshing.

I first paired the Buds with my primary device, an iPhone XR, then paired them with the new Google Pixel 6a so I could try the Google Pixel Buds app for further personalization. Setting up was just as easy, and the app walks you through the process of finding the right size: the different ear tip sizes are adorably housed in a tiny cylindrical case.

The app runs through a test to check the seal and determine if you are indeed wearing the right size. When I first did this test, it suggested I readjust positioning or try a larger eartip size. I did just that and indeed, the seal was infinitely better. I had music running on low volume in the background and with the original eartips, I could still hear it. When I opted for the larger ones, the music was became almost entirely silent.

The app walks you through how to use the touch controls: swipe forward to raise the volume, swipe backwards to lower it, and touch and hold to activate noise control or Google Assistant (you choose which earbud you want to tackle which function). Tap once to play/pause or answer a call, double tap to go to next track or reject a call. And finally, triple tap to go to the previous track. As you go through this list, you’ll hear calming elevator-like music in your ears if you aren’t playing your own audio, a nice touch.

You also have the option to turn on location data to keep track of the location of the buds should they be lost or misplaced. There’s a prompt to set up Google Assistant on the Buds, including Voice Match for using the “Hey Google” command versus just touching and holding the earbud to trigger the assistant. If you already have Voice Match set-up on another Google-enabled device, your settings will be saved and transfer over to the Buds Pro. You can also allow notifications so Google can read messages to you through the Buds.

Once setup, go back to the app at any time to adjust settings, check the battery life of each bud, adjust preferences for features like Google Assistant and touch controls (they can be customized if you prefer), and even run an eartip seal check if you think you might want to switch the size or aren’t wearing them correctly. The app can also be used for firmware updates and to set up multipoint connection, which I allowed so I could connect to both my iPhone XR and my testing Google Pixel 6a simultaneously as I went back and forth between them.

I go for 45-minute walks a few times a week, so I used this routine as an opportunity to test these earbuds (and a few others I had on hand to review) and to compare them with my older-model Apple AirPods as well. Placing the Buds in my ears was easy: I’ll sometimes have to fidget with larger wireless earbuds that end up not being as comfortable, wondering if I put them in the right way, if they’re sealed properly, or if they might fall out at any minute. There was no such worry with these.

I listening to a variety of tunes from various sources, including playlists downloaded to my phone, streaming from Apple Music and SiriusXM, and local radio from TuneIn. As a TV fanatic, I figured a great test of the performance would be to use Metallica’s “Master of Puppets,” which has experienced a resurgence in popularity thanks to the TV shows Stranger Things. I also took a walk down memory lane to listen to Michael Sambello’s “Maniac,” which was featured in a pivotal scene of the series The Boys.

I immediately noticed how wonderful both tracks, and others I listened to, from house to reggae, dance to rock, sounded with these earbuds. The sonic separation is wonderful such that I felt truly enveloped by the songs. I could hear minute details in the tracks with these earbuds that were muffled or indistinguishable with others. While bass performance isn’t a primary focus, in terms of pleasant listening for any genre, they perform beautifully.

My walks include both sidewalks by busy roads and down a quiet local trail where you can nary hear a pin drop. The noise cancellation was effective such that while I could still hear cars zooming by, they fell to the background when I wanted the music to be the clear focus. It’s worth noting that these earbuds won’t rival the over-ear ANC headphones I use for travel that virtually silence ambient noises, like the hum of an airplane. But they worked well enough such that I could enjoy the music without feeling distracted by the busy street noise. This was also the case when working on my back deck one day as a neighbour was doing yard work, including trimming and mowing the lawn. With the earbuds on, I could continue working, undisturbed.

I also noticed the wind reduction was great: a few times, I went out for a walk on a windy day and there was little disruption to the audio. When deactivating ANC to let some sounds in, they did a decent job but again, wouldn’t rival higher-end over-ear ‘phones from premium audio brands like Bose and Sennheiser.

With regards to Silent Seal, it’s tough to determine how well this works though I can confidently say that the earbuds were comfortable to wear for an hour or more at a time.

One issue I often have with true wireless earbuds is that the tap, swipe, and multi-tap operation can be finicky: I’ll end up pausing the music when I want to skip tracks or turning up the volume when I want to activate ambient mode, for example. These were among the simplest and most responsive earbuds of any I have tried, actually doing what I wanted them to do 90% of the time.

The Google Pixel Buds Pro not only look wonderful and fit great, arguably one of the more comfortable pairs of wireless earbuds I have ever worn, they also sound amazing. I’d just as happily wear these for a workout as I would for a lengthy Zoom meeting or virtual press briefing, while commuting, or watching videos on my laptop. Through my entire week of testing, I did not have to charge them once: I simply popped them back into the case each time I got home.

Something worth noting is that if you decide to use these with an iPhone, they will only function as basic wireless earbuds: you won’t be able to do things like summon Google Assistant to make a call or answer a question. This effectively means you’re paying for features you won’t be able to use.

In this respect, the Pixel Buds Pro make more sense as a companion to an Android device. That being said, compared to other wireless buds in a similar price range that don’t include Apple-specific features either, they hold up in sound quality, style, battery life, and premium features, like ANC. But for the most seamless experience with an iPhone, the obvious choice would be the rival Apple AirPods Pro buds.

Yes, there are more affordable options worth considering from other brands as well, but as a companion to a Google Pixel device especially, you won’t be disappointed with the Google Pixel Buds Pro.