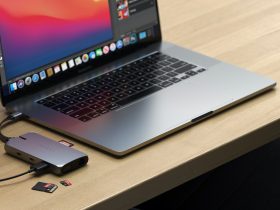 It’s that time of year again! We’re back with the WiFi HiFi Holiday Gift Guides! Not sure what to get that special someone on your list? It has been a particularly tough year, and we all deserve some joy. There are lots of tech gift to suit an enduring passion, new hobby, personality, or style. Here, we’ll look at great gift ideas for kids on your list, from toddlers and pre-schoolers to grade schoolers.

A great tablet the entire family can use, or that you won’t feel guilty handing over to a young child, this affordable on-the-go tablet has a long-lasting battery and fast charging so it will keep kids busy for road trips, screen time at home, or fun educational activities. It has dual speakers with Dolby Atmos, and pairs seamlessly with a variety of Galaxy devices, from smartphones to earbuds. Equipped with an 8.7-inch display, the minimized bezel delivers a good screen-to-body ratio without resulting in a larger tablet. It measures just 8mm thin and weighs just 366 grams, making it ultra-compact as well. Using the tablet, you can do things like navigate with one hand via the gesture-based menus, snap photos using the 8MP back camera and 2MP back, and store plenty of content in the 32GB of built-in storage, which is expandable with an up to 1TB microSD card. It comes with a free two-month subscription to YouTube Premium so you can watch YouTube content and enjoy ad-free music and videos. Pick one up in Mystic Silver (Samsung Exclusive) or Dark Grey for $210.

My son has been wearing the Fitbit Ace 3 for months and absolutely loves it. And now, you can get a special edition Minions version with Minions-inspired bands and a new interactive Minion clock face. Designed for kids aged 6+ (ideally, kids 6-10), it helps kids keep track of their daily steps, helps parents keep tabs on data like sleep, allows for fun family challenges, and serves as a handy watch on their wrists. With an impressive eight days of battery life, you won’t have to charge it too often either. The engraved accessory band comes in Minions Yellow with an embossed Minions design and features a comfortable and secure silicone band and bumper. Kids with any Ace 3 device can also customize their tracker by buying the Minions-themed bands separately in Despicable Blue and Mischief Black. On-device with the special edition Ace 3 is a new animated clock face that lets kids become the Minions’ latest “boss” as the expressive character runs, dances, skateboards, and swims, thus encouraging kids to get moving and illustrating their progress towards daily customizable goals for either active minutes or steps. Parents can also set bedtime reminders in-app, which prompts a special clock-face animation from a sleepy Minion. The Minions edition is $100 or you can get one with a standard coloured band for the same price.

Always a favourite in our household, it’s a tradition that my son gets the new version of this video gave as the Christmas Eve gift he gets to open a day early every year. Kids can dance along with all of the top pop hits as well as older ones with characters on screen showing them the moves, along with a handy guide in the bottom corner letting them know what move is next. Using their mobile devices or a special sensor, they’ll receive scores as they attempt to replicate routines. It’s a great workout for adults, too! The 2022 edition adds 40 new songs, including “Believer” by Imagine Dragons, “Level Up” by Ciara, and others. You can get it for PS4, PS5, Xbox, or Nintendo Switch for $60.

These headphones include one of the most important features for kids’ headphones: a volume limiter. They are also wireless, offering up to 45 hours of wireless playtime, with hifi stereo sound via dual 40mm drivers along with an HD microphone for video calls, virtual school, and more. There are three different volume limiting modes: 74dB for toddlers, 85dB for studying, and 94dB for travel. They come in pink or blue with three interchangeable ear plates that have additional designed so they can customize the look, along with RGB lighting. They sell for about US$40.

For kids or parents who prefer wired headphones, these come in fun colours like blue, green, pink, and yellow and sell for US$30. Geared towards kids in virtual school or taking virtual classes, it features a patented StudyMode that helps isolate voices from other sounds so they can be heard more clearly. Adding to the experience is a detachable beam microphone with passive noise cancellation to further help minimize background noises. It has three volume limiting modes – TravelMode (94dB), KidsMode (85dB), and ToddlerMode (75dB) and an adjustable headband to grow with your child. As wireless headphones, they offer 20-hour battery life along with sharing capability using the BuddyLink system, which allows two kids to listen to the same source device. Each pair comes with a set of decorative stickers to personalize the earcups, which include hypoallergenic and sweat-resistant fabric ear cushions. The headphones also fold up for travel, or taking to school to use.

What kids who loves Star Wars and particularly The Mandalorian wouldn’t want a baby Grogu, a.k.a. The Child, of their own? Instead of a boring plush, however, they can now get a cool animatronic version. Available from Hasbro, it makes more than 25 sounds and motion combinations by simply touching the top of its head to activate. Grogu goes from being happy and excited to giggling and babbling, tired and sleepy, and making Force effect sounds: when you pat its head three times in succession, Grogu will raise its arm, close its eyes, and sigh as if it just used The Force and all its energy is drained. Movements include its hand going up and down, ears moving back and forth, and eyes opening and closing – just like in the popular Disney+ series. While this is one toy that will appear on many kids’ wish lists this year, we wouldn’t be surprised to see it on a few adults’ wish lists, too!

Yes, this is referencing those Kinder chocolate eggs kids love, which now come with toys that work with a companion app. The Applaydu app, which recently became available in Canada and was developed with Gameloft (with educational guidance from Oxford University), brings toys to life via games, stories, and other creative and exploratory experiences. The experiences are tailored to kids aged 4 to 9 and included augmented reality, mini games that help teach organization, memory, rhythm, and motor skills using subjects like math, geography, and music, sounds and vocabulary work through crafting stories in a personalized book, 3D characters, avatar costumes, and personalized adventure books, and customizable avatars. The app includes parental controls via a pin-protected feature where parents can follow their child’s development and progress through detailed activity reports. The app is available in both the Apple iOS and Google Play stores and the eggs – perfect for stocking stuffers – are purchasable in a variety of stores.

Let’s be honest: most kids spent far more time than they should have online last year due to lockdowns and virtual schooling. So, even kids who weren’t originally playing games like Roblox and Fortnite started to learn more about both, particularly as a way to communicate with friends remotely. While many parents have reverted to limiting screen time more strictly once again, kids are still playing games on Roblox or enjoying some Fortnite on occasion. And they love having their own money to spend for skins, in-game items, and more. Is it arguably a waste? Yes. But will it put a smile on a child’s face to get $20 they can spend on some fun? Sure. When you’re all out of ideas, consider grabbing a card of whatever denomination you deem reasonable for one of these video/app games. For Fortnite, by the way, they’re called V-Bucks.

Sometimes, it's nice to have a little something under the ...

Posted by by Christine Persaud 12 hours Ago

Posted by by David Susilo 17 hours Ago

Audiophiles are a discerning bunch who won't settle for less ...