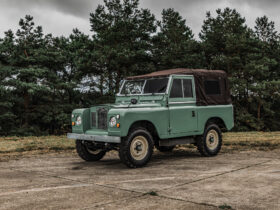 A Tesla Alternative for the Bespoke Age

Apple made waves when it announced its Tile competitor, the Apple AirTag, leveraging its Find My network to offer some compelling features for those who might have lost or misplaced valuable items. Chipolo was announced as one of the third-party companies that would be making compatible products, and one such product was announced at CES 2022 in the Chipolo Card Spot.

Set to sell in the U.S. for $35, which could make it around $50 in Canada, the Chipolo Card Spot is a credit card-shaped tracker that uses Apple Find My Bluetooth network to help locate lost items it’s attached to, from a set of keys to a wallet, camera, backpack, or other valuable items.

Owners can mark an item as missing using Apple’s Lost Mode or leverage the Notify When Left Behind feature that was recently added to iOS 15, which would advise you as soon as you leave the tracker behind somewhere. If you simply misplaced your keys in the house, you can “ring” the Spot and it will sound a 105dB alert within a 200-foot range so you can find where they are.

Apple’s Find My network allows you to locate your lost item on a map thanks to the network of Apple device users. You can have a message and your contact number available with a lost item so someone who finds it can scan a code to let you know it has been found.

The Chipolo Card Spot is IPX5 water resistant as well, in case your item dropped in the snow on a cold winter day or was left on a patio table at a local restaurant in the summer. However, the battery isn’t removable: you’ll have to replace the unit every two years. Given its affordable price, this might not be a dealbreaker for some. However, for others who like to simply swap out the battery, they might prefer to opt for an alternative, like the new Tiles that still include replaceable batteries. There is, however, a return program whereby you can return the old tracker for safe recycling and get 50% off for a new one.

At just 0.09 inches thin, it’s easy to slot one into a wallet or slide it into the front pocket or a purse or backpack. There doesn’t appear, however, to be a keyhole to attach them to a keyring.

In addition to buying one for US$35, they will also be sold in two-packs for US$60 or in a bundle with two One Spot trackers, Chipolo’s first product with Apple’s Find My network capability, and one Card Spot for US$77.