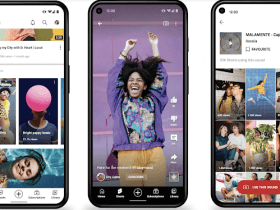 Roku has just released the latest update to its app, OS 9.3, which will begin rolling out to devices in Canada over the coming weeks.

At the heart of OS 9.3 is increased performance, including a reduction in device boot times, faster launch times for a select number of channels (with more supported channels coming soon), and a more responsive Home Screen.

Roku Voice is also enhanced to give you the ability to speak more natural phrases, like “Show me …” or “I want to watch …” You can find movies using a selection of popular movie quotes, too. Roku Voice now also supports a greater variety of voice commands including media playback controls such as “Fast forward” or “Pause,” device control such as “Turn on closed captions,”.. Roku Voice is available on the remote of the Roku Streaming Stick+ and through the Roku Mobile App for all Roku streaming devices.

The free mobile app has also been redesigned with a new navigation bar at the top of the mobile screen providing access to Roku Search, the ability to switch between Roku devices, and a shortcut to the remote control screen. The redesign includes quick access icons so you can launch useful mobile app features without the need to exit the remote control screen, including the ability to browse and/or launch recently viewed channels directly from the remote screen and more.

Roku OS 9.3 will begin rolling out to select Roku players in April and is expected to roll out to all supported streaming players in the coming weeks. Roku TV models are expected to receive the update in phases over the coming months.